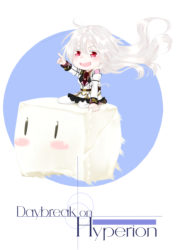 Volume 2 of Daybreak's rewrite has been finished. It's now posted on Krytyk's. Took quite a bit longer than expected but the volume's contents also grew by quite a bit. Overall I'm still happy with the results.

The old volumes can still be accessed via the top menu's dropdown selections.

Aorii here~ After much thought on how I was going to do this, I finally brought back the newly rewritten chapters of Daybreak on Hyperion to Krytyk's. So far this includes all of volume 1, as well as volume 2 up to chapter 8. Updates here will likely be slower than that of my blog on SamaranDaybreak, and I certainly suggest any comments/questions be left on my blog as it's easier for me to notice/reply. But this is a good alternative for any readers that prefers a black background.

In terms of the content, I overwrote the old volume 1 pages completely since the plotline of volume 1 was more or less the same anyway. Volume 2 however I created new pages while keeping the old pages still accessible in the dropdown menu -- since the comments wouldn't have lined up anyway as the content is significantly changed.

Happy holidays and see you around~

Hello all, this is Aorii, it's been a few month since my last post here.

A few of you may have noticed that I put up a notice in Daybreak months ago that the project was currently under resurrection. It was only about 6 months after I officially "dropped" the project did I realize that there was another option I haven't examined, and that was -- to rework the story's starting country to resolve some of the worst problems I had with it.

I started this project almost 5 months ago, but refrained from posting anything over here until I had something to show for it. If you're interested on details of why I did this, as well as planning and goals:

However I am posting here again now because... the project has reached far enough for me to start publishing chapters again. First batch includes all of volume 1, and first 5 chapters of volume 2. See post for more details:

Currently the chapters are only posted over at my own blog. I will be updating them over here at krytyk soon though I'm currently still thinking about how to do this. I don't really want to just recreate all the pages as there's a lot of old comments (and answers) that remain pertinent, but after volume 1 the chapters don't all line up either so... (shrug). No simple answers.

Hello. This is not Krytyk. In fact, it's rather troubling for me to see so many unapproved comments on the queue, which has remained that way for months. Krytyk is usually good at approving those even when he isn't posting. I really hope he's alright.

This is Aorii. It's been a while since I've posted here.

(EDIT: this post is not longer valid. See announcement)

END_OF_DOCUMENT_TOKEN_TO_BE_REPLACED

Finally! (...and Krytyk is back so I'm no longer stealing his thunder!)

Beta readers have been busy and I've been distracted so this took a while.

In the spirit of my works as usual, I hope you learn something from this chapter. The Spice and Wolf readers can tell me how this compares to the depth of economics in that series. Those of you who read Flowers will also see why I wanted to finish that exposition first before starting this one.

In other news, uploaded two character profile sketches of Pascal to the fan art, plus Hachi-Hana has given Tofu it's silkiness~ see the Daybreak and fan art pages for more ^^