A teaser project -- probably not what people were expecting.

This is still somewhat in the experimental/prototyping stage. Good or bad, I welcome readers to leave a comment.

It's sort of genderbender, but also not quite. I don't want to be caught in that maze of tropes and ingrained expectations again.

This is Aorii. It's been a while.

I have several updates to push out. I've actually been sitting on all of them for over a month now; but several of the beta-readers had been busy due to personal reasons and I haven't been able to meet my minimum 'beta-passes' quota until now. This seems to be a consistent trend every winter ^^;

END_OF_DOCUMENT_TOKEN_TO_BE_REPLACED

Another belated chapter update, this one for Flowers in Boreal Twilight. I keep feeling like something is lacking in Chapter 3. Though just like the character that I write, I can't seem to pinpoint what exactly it is. Grasping the metaphysical is hard :<  (Edit: after some more discussions and thought, I decided I didn't really like this chapter and is planning a major edit.)

The next one will also be Flowers as well, as I'm already into Chapter 4 and trying to hit the ground running on its story.

Chapter epigraphs are also being introduced (and retconned to older chapters). It has worked well in another writing project of mine to supplement world-building, cultural understanding, and characterization. As Flowers shines a spotlight on the Samarans and their Dharmic world views, I hope this'll come in handy.

Finally! (...and Krytyk is back so I'm no longer stealing his thunder!)

Beta readers have been busy and I've been distracted so this took a while.

In the spirit of my works as usual, I hope you learn something from this chapter. The Spice and Wolf readers can tell me how this compares to the depth of economics in that series. Those of you who read Flowers will also see why I wanted to finish that exposition first before starting this one.

In other news, uploaded two character profile sketches of Pascal to the fan art, plus Hachi-Hana has given Tofu it's silkiness~ see the Daybreak and fan art pages for more ^^ 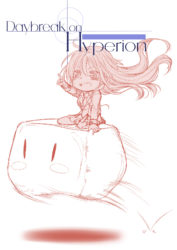 Again, not Krytyk. This is Aorii~

I have a few updates: