Now that Volume 3 has ended... a bit of self-reflection.

This volume was not received well. So as an author, I ended up having a do a lot of soul-searching in the past few weeks... longer, actually.

I've written in the last Daybreak Dev Diary that Volume 3 was me trying to tackle a particularly ambitious topic -- the judgmental biases of human perception -- that proved somewhat beyond my skills as a writer. Sure, I managed to finish the volume and make it... mostly work? But there were definitely some jarring parts, some poorly paced chapters, and a whole midsection that seemed to have thrown people off.

Sylviane -- the main focal point of Volume 3 -- was meant to be a bipolar character from the start. She has a rather mild (yes, mild!) form of a serious psychological illness, and it took a long time peeling back the many layers of issues. Her nearly-molesting Kaede and her suicidal-moment in Volume 2 were meant to be the first peeks of her Hypomania and Depressive episodes. Her bulimia was also a lead-up, as for somewhere between 75% to 90% of anorexia/bulimia suffers, the bulimia is actually a "secondary effect" of a stronger psychological disorder (most commonly chronic depression).

Then she actually, truly crashed in middle of Volume 3 and hit her lowest spot... and a lot of readers hated her for it, and what it did to Kaede in exchange.

(Spoiler warning up to Chapter 12.)

END_OF_DOCUMENT_TOKEN_TO_BE_REPLACED 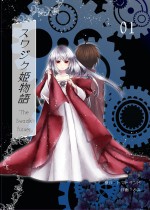 It's taken me a while longer than I hoped, but here is the first web novel review done. The first among... an alright number, I hope. I'm still taking recommendations, details can be found here, I've gotten a few interesting ones already.

But now, without further ado...

END_OF_DOCUMENT_TOKEN_TO_BE_REPLACED

No, not a release this time. I'll be working on that, I really will, but no. It's about WN reviews.

In the past. people have asked for "stories similar to Alice Tale", and I could only say "Yeah, there are none". I still don't know any, but there are other good stories out there where the male protagonist ends up with a female body. Or at least readable ones. And little-known web novels that I find interesting. So my latest stupid idea was that I might as well review some.

Therefore, here are the corner points:

... that's about all that's coming to mind at the moment. The first review should go up over the next few days. *drops dead* (go away, Vic)

P.S.: All WN suggestions in the comments will be deleted or crippled with much prejudice. There's a reason I want them via mail, and with their subject lines formatted like that.