After defeating the boss and the encounter with PK Flein that was an overkill, nervousness quickly left everyone and we aimed to escape the dungeon.

Like that, using the shortest route we arrived on the surface in a short amount of time and immersed ourselves in the feeling of freedom.

Lyly and I sat on spot, exhausted. Also, Magi-san smiled wryly seeming just as tired. Cloude was talking about something with Mikadzuchi and Sei-nee drew near me.

"It couldn't be helped. But, way too much stuff happened..."

In addition to that, we forgot to check the drops. Without thinking much about it I opened the menu to check what did I get and sighed.

"No way I could get rare drops continuously, right."

"Speaking of which, we defeated the Twin-Headed Shark. I forgot all about it with during that rich development. If Yun-chan didn't get it, it doesn't seem like I will."

Sei-nee sat down beside me and with little expectations she checked the boss' drop.

"...I did it, Yun-chan! It's boss' rare drop! The strengthening material I wanted is here!"

Saying so, Sei-nee threw her arms around my neck embracing me. I was embarrassed by the lines of sight around us, but since she was really happy I thought that pointing that out would be very crude.

"Oh right. Lyly-kun, can you reinforce this staff with it?"

I sighed seeing off Sei-nee who moved away unusually excited, Cloude approached taking her place.

"If not for you, this party wouldn't exist, in that meaning we could say that you're indirectly carrying luck."

"That kind of thing is boorish, Cloude."

"Hmph, I get it. Still, to think such a proposal would come."

He said so, smiled, then looked at Sei-nee who was heading towards Magi-san and Lyly to consult on the topic of her weapon's strengthening.

"What? I thought you two were plotting something, did you do something after all?"

When we called the young beasts before the boss to console Sei-nee, Cloude had the Luck Cat Socks raise Sei-nee's luck. I don't know if it affected the drop rate, it might be just a superstition, but I asked him to do so.

Even I don't know if it had any effect, Sei-nee acquired the boss drop so I was satisfied with the result.

"Well then, we're disbanding right. It's getting late so I'll be logging out."

After that, I'll continue my hiding and probably mix the revival medicine. When I thought so, Magi-san called out to me on behalf of the crafters.

"Yun-kun. Before the event comes we'll blow away and clean up all the problems with guild solicitation and such, so just wait."

"I understand. I'll look forward to it."

Then, this time Sei-nee called out, halting me.

"If you're logging out, then can you spare me some time? It won't be that troublesome."

After parting with Mikadzuchi, Magi-san and the others, together with Sei-nee we came to the First Town's portal.

As we walked in brisk pace down the main street, Sei-nee started a conversation.

"Yun-chan, are you worried about Myu-chan?"

"Did you hear from Taku?"

"Yup. 'It seems like she's feeling down', he said. So, I thought 'then isn't Yun-chan worried in that case?'. But, Myu-chan is okay. She's a strong girl after all."

In that case, wouldn't it be better if she talked to Myu rather than to me? While I thought that, I was taken by Sei-nee through the west gate, outside the town's walls.

There, was the place PVP practice was frequently happening at night.

And in the centre of it, there was Myu.

In the middle of a battle royale in which numerous players were fighting all at once, she intently fought using both sword and magic.

"Need more! It's not enough! This is nowhere close to that boss! Next!"

"In that case, I'll be your opponent. Let's raise both of our levels and abilities!"

Myu who was the last one standing in the battle royale system started another PVP battle without even taking a breath. Her opponent was Taku, they both laughed loudly which seemed like a starting signal and the two's weapons clashed, smiling.

As I continued to watch the spectacle that unfolded with their high level offence and defence, Sei-nee spoke to me.

"Yun-chan, are you still worried after seeing this?"

"It's my loss for worrying. Good grief, just my imaginary fears."

Just when I thought she was so depressed, she already was all positive about raising her levels and improving her skills in combat with other players. What a busy person my grand little sister is.

Then, after the two settled their fight they fell down and sprawled out on the night plains. That's when my eyes met Myu's after she fell down. She raised a loud voice and got up energetically.

"Y-you look energetic. Well then, It's about time I logged out and prepared for tomorrow..."

Sei-nee standing next to me grabbed my arm to prevent me from escaping. I've got a bad feeling the moment I was found by Myu and tried to escape immediately but it didn't work.

Taku joined in and I was surrounded by three people.

"No, it's a wolf not a big pup, right. Heck, you should remove me from the member list and take someone stronger." 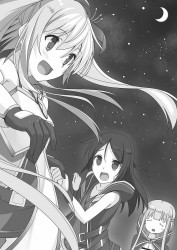 I slowly moved backwards to retreat, but my back was pressed on by Sei-nee and my hand was grasped by Myu when I bent forward.

"Now then, let's do some light PVP training!"

"Let's see just how well can Yun fight. Actually, I don't know that too well. We'll have you show us your abilities."

"Speaking of which, Yun-chan. Didn't you use an 【Enchant】 skill we don't know just earlier? Tell us all about it while we do some PVP. "

I felt like I was lured into an outrageous place.

During PVP, Myu wiped off her sweat with satisfaction, Taku happily chased me all around and Sei-nee overwhelmed me with ease despite leaving her main staff with Lyly and using a sub-weapon. This time it was me who fell down on the plains and sprawled out.

It was hard for me to even move, but thanks to that all rather than my attack senses, the senses related to avoidance were intensely raised.

Being able to clearly realize I have become stronger, I thought it wasn't so bad.

"All right, let's do it again sometime!"

But, I didn't want to do it ever again. I logged out in such mood.

The crafters' event is nearing. Also, with preparations for the raid quest we found there was lots of things to do, sounds fun.

● Caught an eye of Flein, a PK

52 thoughts on “Epilogue - Enthusiasm and PVP”