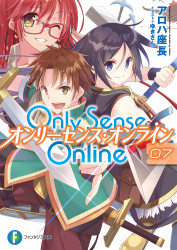 Well, OSO chapter 4. It took me longer than the previous ones because I'm busy again, the next ones will also take longer, possibly much longer than this one as I can only work on it for an hour or two every day. Anyway, the link is here, in the first paragraph even!

Second issue, some of you might have noticed that I added some more headers on top. Well, like I responded to someone's comment, it's been over a year since the blog was made, so I thought of adding some freshness by adding more headers to rotation (2 OSO's, 2 Antimagic's) based on the two main series.

Third issue... soon enough a cover for OSO vol 7 should appear. Who do you think will appear on the OSO 7 cover? It would make sense that Taku would appear or his party members considering the webnovel source (apparently this volume will be largely based on webnovel). But that would be too easy. Thus my guess is Lucato, Yun, and Myu.

PS: I don't really like that chibi-Yun illu. It creeps me out.

PS2: The vol 7's cover was actually out (very unusual that amazon put it up before kadokawa's page). I'm putting it up instead of the creepy Chibi-Yun. And it really was Taku (the "too easy" option I mentioned above).

PS3: Remember to purchase the light novel if you are able to, improve the sales so it continues forevar! Don't be a leech, pay for it!