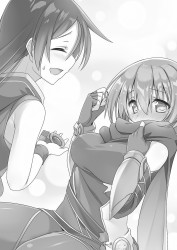 And so, another chapter of OSO.

The talk this time... translating this chapter I realized again that author is very knowledgeable about games and MMO's in particular. As an experienced MMO player I stumble over known mechanics over and over again, which makes me smile knowingly from time to time. This time I was reminded of RIFT's Greenscale's Blight raid's maze made out of plant walls. Also, the group matching mechanic from MMO games and scaling to level were explained. Keep up the good work, Zachou-sensei.

Now, the topic of Antimagic's anime... apparently the first volume will be given just two episodes. I kind of expected that, but it does depress me. So far I was quite disappointed by the voice actors (they're great voice actors, but I think they're not matching the characters), but I hope I'll be pleasantly surprised. I guess for now I'm gonna withhold watching it :3.

Since it's been a while, I'll add a status update on the translations. There are no major changes in the schedule. I'm going to finish OSO 6, move on to AMA 11, then back to OSO 7. Elvenblood is stalled indefinitely and don't expect me to do it - I might even take a year or more even if I return to it. After OSO 7 I plan to do Antimagic vol 2 re-translation. What's after that... I'm not going to plan so far into the future.

Now that you read the wall of text, here's the link.

Which reminds me that Bookwalker is running a 50% off promo for all Kadokawa books, all the latest volumes are excluded from the promo though. It will last until the 8th (Japan time).