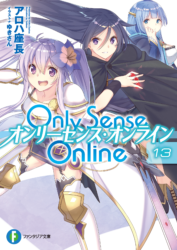 It's been a while since there was a post from me, so I decided to take opportunity now - especially that a new OSO volume released today.

I'm still busy with work now, but better times are coming - judging by the work schedule I have. So don't despair, I'll probably drop an OSO release within a week or two. I should have more time in October, so I plan to move on with the story.

In any case, I'll try to get at least one chapter out within the near future, to start with.

PS: OH, I completely forgot! Today, OSO's author has released a first volume of his new novel, in English the title goes "Monster Factory - Demoted Knight Opens up a Monster Ranch" (ーモンスター・ファクトリー ‐左遷騎士が始める魔物牧場物語‐) and appears to be a slice of life story about a knight doing farming/cooking stuffs in a fantasy world. Honestly, I don't have time to even read it, but it might interest you.

PS2: Updated OSO main page with chapter titles, this is all I have time for, for the time being.