Now, I welcome you all to the new blog. 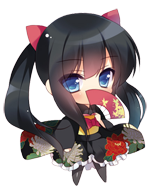 Basically the idea about the new blog is, that I didn't want to continue posting stuff on baka-tsuki.org and having the releases labelled as 'baka-tsuki' releases.

Now, some of you will say that it's because I want to have my name on the releases... I do, but not for the reasons you might think of.

First, I've been really happy to translate stuff and post on baka-tsuki until now. It was a nice environment where I had a lot of freedom and could slowly but surely post my translations and administer them. I'm thankful to baka-tsuki for allowing me to do that.

However, recently the baka-tsuki community, and also some of its administration started changing. The unwritten and unregulated standards for quality, below which the translations hardly ever went except for a few individual cases, have shattered. Some members of the community and administration have been actively encouraging low quality translations done by amateurs with no knowledge of language and no dedication to researching. Not only they were allowed to post that subpar garbage, but they are also encouraged and some of the administration legitimized their actions.

The criteria for accuracy of translations has been completely abolished, the current criteria of whether something is appropriate to be called a 'proper translation' is whether it's readable or not. Even the worst garbage which is filled with lies and far from original book's content is allowed to stay labelled as proper translation as long as it's edited and readable. Mind, that editing garbage only covers up mistranslations and the fact that a big part of it is fan fiction. It does not correct translations.

Let me clarify the issue of TLC while at it, since there are talks of 'things being TLC'd'. TLC DOES NOT EXIST. There is no legitimate TLC'ers in these series. The only person who can call himself a TLC is someone with proper knowledge of web novels or light novels' original language. And there are none among these series. All over baka-tsuki there's only a few people who actually do TLC, I would be surprised if we found 2 or 3 of them. TLC of a machine translation done by another machine translator is a joke, and not a funny one at that.

And exactly those translations are spreading like a cancer, seemingly they start to infect more and more web novel and light novel series. The results are obvious. Some of these series will never be properly translated by a skilled translator, and will be doomed forever to be inaccurate and filled with fan-fiction garbage. Readers will probably never come back EVEN IF, the series were ever properly retranslated. Except for a few, readers usually do not come back to re-read series. All the readers the are lied to, being given inaccurate and untrue translation.

My stance is to encourage proper translations, translations both readers and above all, books deserve. Machine translations or live translations, anything is fine as the quality is maintained (which isn't being maintained, as mentioned above). In the light of current cancerous spread of subpar quality translations, I decided to distance myself from baka-tsuki as a hosting service for my translations. There are few goals I hope to achieve:

1. To bring more attention to the issue at hand by stirring up a fuss.
2. To avoid having my releases lumped together with subpar garbage that recently started to appear on baka-tsuki.
3. To acquire ranting space I can use to write posts like these.
4. To promote translator individuality, professionalism and high-level dedication to one's series which goes beyond 'translate, drop, forget'.
5. To bring more attention to issue of quality, and promote quality translations. There are many translators who bring you HIGH QUALITY translations by doing their best, the amount of work they do and time they spend is far beyond what the 'subpar-garbage' translations do. Support them, they deserve the support (And I don't mean myself, although it would be nice if you wrote one or two good things).
6. Stop the cancer from spreading onto different series, save the books from being infected.

I wish for nothing more than increase in amount of translated series, and translators doing them. However, it cannot be at cost of translation accuracy. I will support any translator recruitment and encouragement initiative, as well as training initiatives for newbie translators. But I won't support the logic of 'speed/amount of releases>accuracy' which is heretical and should never happen.

As someone who started off with machine translation and memorizing kanji, and through hard work with multiple dictionaries at once to provide accurate translations. I'll encourage all the newbie translators. I might even create a guide to 'how-into-translations' in the future.

But, do not upload garbage for readers to browse through. If one does not have dedication to work on every single piece of work until it's accurately portraying what was written in source language (Japanese, Chinese, Korean), then do not do it at all, or at least do not claim it's translation, I don't want my translations being lumped with that. There is a community on forums.animesuki.com which in many cases is based on spoilers, that is the place you can do your best, and you can help the others who are very eager to know what might happen in the future.

Everyone, welcome to krytyk's translations' site. The site's been designed to maximizing readability and for the ease of navigation. The prime reason for this site to exist is to provide easy-to-read format for translations.

This site is not a homebase of a group, there is no group. There's only krytyk, and this place is just a space for me to dump the translations I do, and allow some people to edit them. That is all.

There is no ads. I do not take any donations. Any positive comments are welcome though.

Translations from a fan for the fans.

127 thoughts on “Looking for cancer? You won't find it here!”