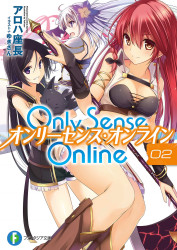 So yeah, I've edited and released stuff. Now onto what should I write in this post... yup, I'm tired, the pace on this volume might be significantly slower.

Now, as to comment on some comments and questions.

I will not pick up any other series in foreseeable future. Also, I will not translate OSO's web novel. I do not interest in webnovels as that's a raw project without professional editing, it's so raw it feels still alive... speaking of which, do you know webnovel version of Yun had short hair? ...back to the topic. I interest only in released novels, no matter what form they originally started with. They have the polish onto them that's worth paying for, as opposed to webnovel which can be written and published by anyone, yes, you reader A, you can write anything and publish on syousetsu website, and that'll be called a webnovel, for better or worse.

So yeah, I treat light novels and webnovels as completely different mediums, completely different books. Seeing people add light novel illustrations to webnovel translations seems silly to me, no, IT IS SILLY. The illustrations are a product a professional artist commissioned by a publisher draws for the LIGHT NOVEL. Not for some raw draft, which is so raw it smells of fish. I do not intend to insult webnovel fans, but I think people have to start realizing that webnovels =/= light novels.

My motto is: To read books the way it's supposed to be read. And that includes me too, the humble myself hasn't read the book beyond what I translated up until now.

That's why, do not put spoilers, summaries or google translations in comments. I'll delete them on sight.

Only Sense Online's light novel vol 3 is supposed to come out around 20th October, according to what I've been told, if anyone's curious about it.

PS: If you want to support the author, consider buying the book. Even if you don't want to pay for shipping costs, even purchasing the ebook version of it will support author. In fact, it's cheaper than physical version and the same amount of money goes to the author/publisher as if you purchased a physical version, you can purchase one easily if you have a credit card or paypal.