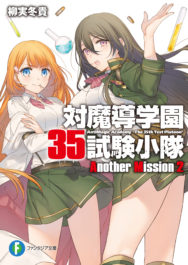 And Yun's fate is to embarrass himself to death, I'm sure of that.

Hey hello, been a while (two weeks?). I'm busy as usual so I'm not pumping out translations like a madman, sorry 'bout that. I'm sure better times will come one day, someday...

Anyway, one more chapter and epilogue until the volume is complete. That's when I move on to last volume of antimagic (aside from two Another Mission volumes)

And speaking of Another Mission... yes, you can see it on the right side. The new cover for the volume 2 of AMA's short story compilation, Kippu's art is so damn cute, as always. It will be coming out in two days, and it will be a definite end of the series. Well, I'll eventually get to translating those as well. There's no hurry since the series is ending.

Now the link to OSO chapter this time.

18 thoughts on “You Can't Win Against Fate”