If you were blow off to a fantasy world full of violence, what weapon would you choose?

There's a lot of them, but in limited circumstances the strongest one would be surely the gun.

In action games and role playing games, when you create your character, even if you can pick the gun which is the strongest weapon you would still choose other weapons.

But in reality, everyone would pick the gun.

Because they don't want to die.

Foreigners are saying "Japanese RPG is unrealistic ,they're using swords in the world that has guns, banzaiattack, harakiri, crazy.".

But, is chosing the weapon you love a sin?

Is sticking to something bad?

And more than anything, what I want to say is,

——Games and light novels are already fiction, it's fine to use a sword.

What was completed based on that idea, is this book.

Actually, about half of it.

It was made from such worldly desires.

Ouch, don't throw stones at me. Don't throw E**alibur at me, I'll cry!

Greetings, nice to meet those whom I meet first time, it's been a while to those who have been with me in the previous series.

Was it 9 months since then? I started again unexpectedly early, but it still took a while, my apologies.

Well then, the new work "AntiMagic Academy "The 35th Test Platoon" "... how did you like it?

If it was fun, then I'll dance in joy.

This work was a new experience to me.

Because I'm not very knowledgeable on the guns, I thought "What to do if I make a mistake.." and wrote the book with a mixed state of mind. If I was wrong, I'd be grateful if you didn't throw stones at me or shoot me from a M60. I'll die.

Character's wise it was also my first time.

It was my first time writing a Takeru or Ouka-type boy and girl.

A Weak-kneed and pathetic yet actually strong protagonist, living care-freely yet actually having a shadow hanging over his life.

A strong character that is actually very lonely, although she looks serious the pain makes her embrace madness.

A loli with big breasts.

None of these were in my previous work, or the one before that, a serious key character.

Eh? You want to hear at least one serious thing? 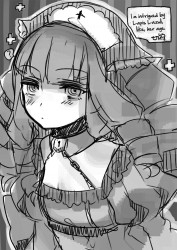 I wanted to say here that I love lolis with big breasts, but I'll omit it as I'll be head-shoted by those who love flat chests. Though, I think the ones who have kindly read my previous work know it, I love flat chests too?

Next, about the world in the book.

If I were to give it an image,

I might be completely wrong, but I wrote it having such an image in mind. Even though science and technology had evolved, there's magic, witches and Inquisition. A world with problems like that, which continues to change.

Of course, since a fictional war and a disaster happened, while it has a similar base, its history is quite different from the real world.

With fictional things from legends and mythology existing, it'll get quite chaotic.

Therefore, go easy on me when comparing it with history.

If you retort to me too much I'll be troubled. I'll cry.

About the other half, that is... since I think there are quite a few people who start reading from afterword, It would be better if I didn't write it out here.

No, it's not like I have nothing to write? I've got lots to write but I'm thinking for the reader's sake. Obviously——stop with the fist-sized stones. I'll cry.

Now then, after writing a strange afterword, it's the traditional acknowledgements.

First Kippu-sama who has drawn wonderful illustrations and thighs. Already at the stage of character design I've been struck agape. Taking advantage of the character features, listening to my requests yet making such perfect beyond my imagination characters... made me tremble as excitement welled up inside of me.

Next,  one who helped me sharpen the edges of my rough plan, S-sama in charge. Everyone in Fujimi Shobo.

And above all, you readers who have took this book in your hands. Thank you.

Well then, I pray that I'll be able to see you in second volume.