Near the end of April, it was a very warm evening.

She looked down on the night view of the city spread below and sighed.

Chatting voices could be heard here and there and also a live performance of classical music in the middle.

Every sound that passes through her eardrum and is amplified, echoing in her head.

No good, lack of sleep is hitting me at full power.

The girl——Kiritou Haya drank water from a glass all at once trying to shake off drowsiness and intermittent headache. Although she hid it with light makeup and wore a vivid scarlet party dress, a glimpse of fatigue could still be seen from her expression.

As the cold water flowed through the back of her throat, the sun peeked out from behind the haze obstructing her thinking.

She cursed quietly and looked around the venue again.

The party hall was located at the top floor of a certain hotel. It was one of the best hotels in Japan and its furnishing was very refined, it had a really pleasant atmosphere.

Guests inside the party hall were just celebrities matching the atmosphere. The sponsor was one of the four major cyber-related corporates 'Namisagi', and all four corporates were attending parties.

In name, it was a party concerning 'presentation of the new Arclight' but that was already over, and the venue was occupied with social exchanges. Namisagi family's head changed recently, he probably wanted to make himself known.

I finished my round of greetings, I can just rest now while I listen.

Just how many people did she greet. Because she couldn't afford clumsiness, she was even more cautious than usual. Even though there were countless times she did it since young age, she still couldn't get used to it.

"——Haya. What are you doing in a place like this."

Just as she tried to eat some food from a plate, at the exact same time sounded a voice cold as ice. Haya's heart tightened for an instant, but loosened soon after.

"I told you to show your face to the guests, haven't I."

"I have done so without any problems, Father."

As usual, with no indication of her true character she displayed the mask of 'yamato nadeshiko' as she faced the blood-related man classified as her 'father'.

A powerful man who through management turned his company into a huge group that is one of the four biggest corporates in just a single generation. Only thoroughly seeking profit, the nickname he was given because of his ruthless finesse in which he eliminated all nuisances was——The demon king.

Same as always, this person.

They were family but she didn't feel any warmth, his eyes were stone-cold. He didn't look at his daughter too often, well, she would be troubled if he showed her his fatherly side now.

"That's fine then. I still have things to do. Just keep hiding your thoughts, keep them behind the wall."

For this man, his daughter Haya was only a tool.

This party was a chance for him to develop a kingdom called 'Kiritou', and she was brought in as a convenient tool for that. Haya herself understood it to a disgusting degree.

Kouya left, and Haya looked towards the ground with her heart frozen over.

It's been always like that after she speaks with that person, being reminded that she and many others would be discarded once they could not be utilized any longer.

In an attempt to right herself in the outside air, Haya snuck out to the balcony in secret.

She looked up at the night sky that was closer than usual and repeatedly breathed deeply. The chilly air of the night cooled the heat of her body, the equipment attached to her wrist started flashing.

"Come to think of it, you've been trapped there for three hours now... Iora, you can come out."

Making sure no one notices, she activated the terminal.

The built-in projector displayed appearance of a small girl that looked like a fairy. The girl clad in blue light started to fly around Haya——Iora started to dance in the air like a little girl.

Her figure was flying around under the night sky, seeing that fantastic sight Haya let out a sigh unintentionally, beautiful. 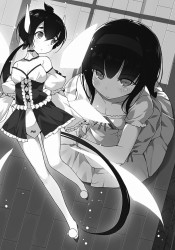 After looking at the fairy dance, the strain on Haya's mind loosened.

Normally it was impossible for her to relax in public. However, now she was very tired after working hard every day.

That is why. Until she was called out, she didn't realize her existence.

Haya was surprised and responded while immediately donning the expression intended for external relations.

There, was a girl as white as snow.

The first thing that caught her attention was the girl's skin colour, her skin was like scattered snow. No, it was not just her skin, her shining hair lit up by the moonlight was silver as well, even her fine party dress——it was all pure white.

It wasn't a bright colour, it was a colour that could've been dyed easily, like a pale white light. She was so white she gave a feeling of a mystery that shouldn't be approached.

The girl asked while looking at Iora who danced in the air. Haya hesitated for a moment, but it couldn't be helped now that Iora was seen, and answered honestly.

"I see, I apologize for the sudden question. It's rare for someone to bring an AI to a place like this, so I've been surprised."

It wasn't limited to parties, bringing AI's along when in public was implicitly prohibited. Because AI's were existences made to support people, it's used mainly by people ignorant to cyber-related things. Bringing such a thing along was simply shameful.

Even so, I didn't expect to be asked about it so bluntly.

She was probably one of the guests, but Haya couldn't find her on the list she had in her memory.

There was no way she would forget such a pretty girl——...no, she had an idea who might she be.

"Are you the Karasuba's second daughter?"

That's what Haya has suspected, it came from the rumours she heard at the party.

The second daughter of Karasuba's that didn't appear in public since childhood——that was the rumour with no authenticity to it.

The girl's expression sank down.

That's how it was. If the rumours are true, she participated in the party... no, she was forced to participate because——

"...I apologize, I need to greet everyone in the hall, I must excuse myself."

Momentarily, Haya called out to the girl stopping her, and held out data in the form of a crystal that came from a terminal.

"It's a free pass to freely play in our Kiritou structure. I don't have much to give a Karasuba, however take this as proof of our acquaintance."

The girl had a troubled expression as she stared at the crystal.

Because of the girl's reaction, Haya took her slightly outstretched hand and forcibly transferred the program's ownership.

"With this, the pass is yours. If you don't want to use it, just dispose of it. It might be a waste of a valuable free pass, but don't mind it."

While being slightly mean, Haya achieved her goal and the white girl saved the free pass in her terminal.

"Thank you very much. If you go that far, then I shall use it to the fullest."

"I see. Ah, my recommendation is 《Aries》. My acquaintance uses it, please do try it."

The girl bowed down again embarrassed, and left.

When she completely disappeared from Haya's sight, Iora came down from the air and stood on Haya's shoulder, she had sceptical look in her eyes.

〈"What does Master intend by acting like that towards her, I don't get it."〉

"I didn't really intend anything. If I were to name it, that would be——"

Haya stared at the numerous sparkling stars, and muttered softly towards the sky.

"Just a little, she resembled me just a bit, I wanted to help her free herself even if it is just a little bit."

The gear that marked the very beginning started to rotate quietly.

One thought on “Prologue - Banquet of The Influential Ones”