With her left and right hand each, Till enchanted Shion-san's and Blackie's weapons.

"Oy, is it going to be okay with the Ice element?" Blackie asked the plausible thing.

"Worry not, one only enchanted the strength of your weapons, one didn't give them the element. One understands that much. Though actually, if someone could enchant it with Lightning, matters would greatly differ..."

"... If I shoot Thunder at the weapons, it might stick! Sizzle sizzle! Let's try it, Onee-chan!"

Without showing a shred of interest in me, Blackie headed for the Ice Dragon.

I'm not sulking or anything.

With a wry smile on her lips, Shion-san patted me on the head twice and shifted to attacking, too.

That's how you do it!

This difference in consideration, do you get this, Blackie?

"So, Till. Can I just keep attacking it with Thunder?"

Ilya's took the attacks of the raging Ice Dragon and created a safe area for Blackie and the rest of us.

Shion-san kept up fighting it in close quarters while dodging every single of its attacks.

Both of them had their lives on the line.

Not being able to do anything substantial vexed me and made me impatient.

"Please don't ever call her that ever again."

"What are thou getting angry over? Oh, well, Alice! Currently, though are only able to cast that one spell?"

Lying wouldn't change anything about it.

And Heal was something else entirely

As I was, I couldn't use any high-class magic, or support magic, like Till could.

I was aware that I was useless.

"Nothing. Hey, Alice. Have thou ever learned magic from someone before?"

I raised my level, finally learned my spells, and figured the rest out myself.

"One wouldn't say one won't be your mentor, thou know?"

Come to think of it, before entering the city, she may have said something similar.

Although I find it a little mysterious why she'd set her eyes on me...

But more importantly, people were fighting at the moment!

Impatience welled up inside me.

It wasn't the time to worry long.

"My mentor! Please become my mentor!"

"That is a commitment. Thou need to think well about whose disciple thou become. No matter how much in a hurry thou may be," Till smiled wickedly as she threatened me.

Still, I cannot think calmly in such a state of emergency.

——But I had thought it through.

I knew more than enough about Till's true power.

And moreover, although we hadn't known each other that long, I knew about her temperament, too.

"I would be proud to learn under a gentle person like Till."

"———Thou are embarrassing me," Till whispered and threw something to me.

I caught it in a hurry.

It was a silver bracelet with a mysteriously glowing, expensive-looking golden jewel.

I did wonder if it was alright, but obediently put it on anyway.

After I put it on my arm, it glowed lightly and tightened closely around my arm.

It fit so good to my body, I couldn't take it off no matter how much I pulled.

Don't tell me this was some cursed initiation!?

"That is called the Sylv Faeria. Well, it's the proof of being one's disciple. It raises the power of magic... or something like it."

"Eh? Is it alright for me to receive something so precious!?"

I thought in that case Till should use it herself.

But Till only laughed while watching the battle fold out.

"Thou may still not understand. The joy of watching others grow."

"Now, hurry it up. Chant that Thunder thou are so good with."

Till pushed my back and sent me off.

And then I had a sudden thought.

I spontaneously turned around and asked her.

"Till... you haven't fought seriously at all yet, have you?"

If Till seriously gave it her all, she wouldn't lose, would she?

That's what had come to me.

She just laughed at me and had apparently no intention to answer.

By adding Shion-san, the battle situation had turned around

The one-sided battle had reached an equilibrium.

By taking the front position in turn, they gave each other leisure space.

When Ilya was at the front, Shion-san repeated hit-and-run attacks while taking it moderately easily.

On the other hand, when Shion-san was at the front, she drew all attacks on herself and dodged them, lowering the burden on Ilya.

Ilya had been completely exhausted, but she seemed to be recovering to a degree.

I keenly felt the importance of switching out the tank when fighting against strong enemies.

And this time, Blackie's attacks cut open the Ice Dragon's stomach and dealt damage to it.

Blackie wasn't as fast as Shion-san or as hard as Ilya.

But, it seemed his attack power was higher than the two's.

If it was higher than Shion-san's, that meant... Strength 4?

With weapons in both his hands, his style seemed to imply it didn't need any defense. It felt somewhat risky...

Anyhow, the cooperation of the three was outstanding, and compensating for the fact that it was their first combat together, you could feel their overwhelming sense for the flow of battle.

The Ice Dragon on the other hand didn't even have time for another breath attack.

——but the lack of a decisive attack on our end was true as well.

I stroked the bracelet on my left arm.

I should be able to do it.

In this situation, Till wouldn't do anything meaningless.

Saving the town while acting indifferent, worrying about Ilya and taking the the breath head-on, and then——she'd even looked at that woman with sadness in her eyes.

"——Split the heavens and become a ray of light!"

I raised my left hand and started chanting.

And then, the light took at clear shape in front of me.

It was floating in front of my left hand that was activating the magic.

"To strike my enemies!"

I myself felt how tremendous the amount of mana was.

It was... being amplified. Or rather, the image of my mana which I hadn't been able to put to use myself was being poured into magic, leaving none behind, was closer.

With this power, that simple dragon was...!

A flash shot out from the pentagon.

From its appearance, it wasn't something you could call it low-class magic anymore.

If the magic I had shot so far had been a gun, this was a cannon.

The consumed amount of mana was enormous.

So far, I hadn't ever exhausted the mana inside my body with one Thunder.

But its impact was that much more tremendous, too———

Pierced by the lightning, the dragon writhed in pain like never before.

Having a living being the size of a house rage in front of you does have that great intensity, but...

But, we still hadn't defeated it?!

"...amazing," Shion-san looked at me with a smile.

Ilya's eyes were wide with surprise.

I couldn't shoot the next one right away.

Even though I thought that would end it.

Lately, I was fine ignoring the cooldown of a normal Thunder to a degree, but...

Would ten seconds cooldown be enough?

——But that thought really was too naive.

Like he had judged me to be the greatest threat, the Ice Dragon planted all fours on the ground and turned to me.

Shion-san slashed at him, but the Ice Dragon didn't falter from the wounds.

Its big frame settled securely on the ground, it was unperturbed.

Blackie tried to cut down the dragon with the daggers in his hands, but even with furrows in its belly, the Ice Dragon didn't fall.

Does it let us cut its meat to break our back?

Seeing how it understood where the battle would be decided made me amazed at its instinct of the wild.

——Heyhey, do you want to kill me that much?

Will be you satisfied if you kill me?

Honestly, I——wonder how I feel about that

Am I returning to nothing after I die?

I'm even scared to imagine it.

But right now, being scared is natural, that's a given.

The Ice Dragon opened its maw.

The breath was coming.

I get the feeling I won't make it by just a little bit.

This dragon had killed members of the militia and combat slaves.

But in the end, it might just have reacted to danger, too.

Suddenly, my hatred for the dragon lessened.

Then who should I hate instead?

———coming to this world half in fun, myself?

It's true that I hadn't ever imagined it would come to this.

A lot of townspeople must have died.

I turned indifferent to it all.

And in front of my eyes, my judgement was finally prepared.

I thought my eyes met the dragon's.

I thought I'd died.

I inadvertently closed my eyes.

It took awfully long, so I opened my eyes.

In front me me, Ilya was stopping the breath.

Unlike Till's barrier earlier she was literally——shielding me with her body.

The blades of ice and the brutal cannon balls coming with the force of a blizzard.

She was stopping them with her body alone.

In that storm of destructive ice and snow, Ilya squeezed out words for me

While under attacks too overwhelming for her delicate body.

I had nothing to answer to that frail voice.

Showing me her profile, Ilya glared at me while blood was trickling from her mouth.

The courteous, mild-mannered Ilya was nowhere to be seen.

There was only a girl shouting the desire from the bottom of her heart.

The dragon girl had said.

Could there be another desire that pure?

Once more, I tried reaching my guilty conscience.

I tried to remember.

For a moment, I tried to think calmly.

I put my feelings of guilt on a scales.

The moment I said it out loud, tears welled up.

"——Split the heavens and become a ray of light, to strike..."

Have you been born just now?

Did you want to live more?

Ahh, come to think of it, this is the place where I first took a life.

I recalled the memories from that time.

I also recalled my pledge from that time.

Yeah, I really am bad with that. 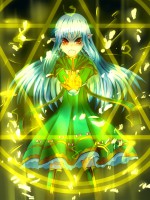 The flash pierced the breath and enveloped the Ice Dragon.

And left a thundering roar on the beautiful meadows.