Takeru stared blankly out the window from his bed, it was a beautiful afternoon.

After Mari was taken away by Inquisition, Takeru was carried on a stretcher to Seelie. He was taken to the intensive care unit accompanied by Hayato and the members of Small Fry Platoon.

The Seelie said that although he stood no chance with that much blood loss, the wounds were already closed when he was taken in.

He thought it was reproduced by Lapis at that time, but apparently it was different.

After Takeru fell, it seems like Mari took care of his wounds using her magic.

It seems like Ouka stopped Inquisitors from arresting her until she was done with Takeru's treatment, when they said words of farewell, Inquisitors were already pointing a gun at Mari.

...Mari was then imprisoned in the in deepest part of the forbidden area.

He didn't know what happened after that.

He suddenly removed his gaze from the window, Lapis sat down on a round chair and peeled an apple.

Lapis brought a fork to his mouth while saying "Nn".

"There's nothing left of it but the core, is there?"

Takeru looked in her eyes, because Lapis held out the apple's core expressionlessly, he had no choice but to say "Aan" and eat it.

"Hey, why did you go 'eh a lie' just now? Why did you repeat with such a nuance?"

Lapis decided that on her own, and started to peel another apple.

And only core would be left anyway, even though that's what he thought, he moved his jaw up and down chewing the apple core with an unfocused expression.

Somehow, he felt as if he had a hole in his chest.

Did he really save Mari?

Even though he decided to shoulder half of her sins, he could not do it like this.

In the end, Mari was placed in the deepest prison. The evidence of false accusations gathered by Ouka lightened Mari's accusations, but not all of them were revoked.

He sighed feeling defeated, just as the melancholic feeling strengthened, someone knocked on his hospital room's door.

Even though he didn't respond, the door was loudly opened.

Ouka ignored his retort and immediately closed the door with a loud bang.

"What is it? Is there some urgent errand to do or something?"

It looked like that was the case as Ouka looked around the hospital room meekly.

"Haven't Saionji and Suginami come yet?"

"They were delayed a little, I asked them to buy me anpan and milk."

Contrary to her words, she didn't seem envious at all.

Ouka came up next to Takeru's bed and sat on one of the stools.

"Well then, there's something I need to report to you."

Looking meek, she said to Takeru.

"...about Mari, was there any progress?"

Takeru leaned over and asked Ouka.

Ouka closed her eyes and crossed her arms, and made even more meek face.

No way, is she going to be left in state of suspended animation forever——

The door of hospital room opened pushed with a forehead... and unexpectedly, Mari's face appeared.

Takeru couldn't grasp the situation, and was in daze.

Ouka looked at Mari with half-closed eyes and clicked her tongue.

"For me, it's an unfortunate result."

"I was stupid to think even for a moment during the time in colosseum that you were okay... but you're just as annoying as ever!"

"Thanks to whom do you think you can be here?"

"Didn't you close the door as I tried to enter this room?! I hit the door with my forehead because of that! Look here! This bump!"

"Blame your own clumsiness. I tried to make Kusanagi happy with a surprise."

"You inflicted an injury on me with your surprise. Whatever!"

"I didn't organize it for you. I did it for Kusanagi's sake. I don't acknowledge you."

Mari blushed and tried to grab Ouka in anger.

Being asked, Mari blinked a few times and moved her gaze away from him embarrassed.

"...this one complained to Chairman, and somehow got me out."

"It's conditional. As long as she takes part in experiments of Inquisition's anti-magic materials, help Seelie's in their experiments on magic injury healing drugs, she can live a normal life."

"Experiments... is that really alright?!"

"As long as she agrees to it, those guys will gladly cover the costs of Gleipnir. They really are sly bastards."

Just as Ouka said that, Mari looked towards Takeru with a bright expression.

"It's alright. People from Dullahan are always accompanying me during experiments, so they won't make me do any weird things. I don't feel too good about being a guinea pig, but I'm not in a position to nitpick. Above all else, I'm free. There's no reason not to do it right?"

She moved her hands behind her, near her waist, and added, "Also." 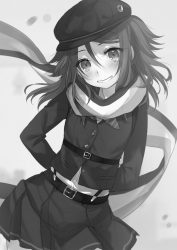 She intended to say it casually, but her face turned red. Ouka who was next to her, stared at her.

"...she also has permission to attend school. The witch enrollment system will be formally adopted. But in the end, it looks like they won't be allowed to participate in platoon activities."

"I might not be allowed to participate, but I don't plan to play around."

"No one asked you to come over."

"You're not our comrade, don't come over!"

Takeru watched the two argue, and he unexpectedly looked down on his bed.

A joyful smile appeared on his face. At the same time, something hot flowed from his eyes.

He felt as if salvation filled the hole within him, Takeru wiped his eyes with a finger.

"Takeru is probably crying because you hurt me——!"

"Why would you getting hurt make Kusanagi cry?"

"That's... look, it's because my bond with him are deeper than yours."

"W-wha... there's no way we who have fought together, have weaker bonds than a shriveled up witch like you!"

"Ah—— another discriminatory speech from you〜... who the hell is a shriveled up witch!"

"It isn't shriveled up, it's just small!"

In the hospital room, there were some noisy individuals; seeing them Takeru smiled as he cried.

After a few minutes, Usagi and Ikaruga joined in while the two still argued with each other, and the situation became even more noisy.

He realized that it was the usual Small Fry Platoon.

But this time, Takeru was happy that it was just the usual between his comrades.

The same day, in the Chairman's office, Kurogane Hayato reported the information on Valhalla obtained from Nikaido Mari.

"I didn't get too much, but the analysis of the new Dragoon that rampaged... has confirmed it."

"I didn't want to think about it... but from the beginning there was no other possibility."

"Yes. Their technology was quite original. Banshee undercover were also hit, several people are missing."

Sougetsu had the report passed to him by Hayato in one hand, and looked outside the window at school after turning his chair.

"They were gray, close to black... but they're moving so blatantly now. I wonder if they went mad. I wanted to remain allies if possible but... we would have to compromise too much now."

After throwing the report at the desk, Sougetsu smiled and rested his cheek on his hand.

"——For the time being, call Suginami-kun. I want to tell her about her home."

One thought on “Epilogue”