After using Double-Edged style's secret art Ama-no-Habakiri and blowing up everything in a radius of two kilometers, Orochi pierced the ground with his sword and got down on one knee.

Orochi continued to breathe roughly, covered with a huge amount of sweat.

In addition to the burden of using Ama-no-Habakiri, there was an even higher after-effect of using Gungnir.

Gungnir, Mother Goose has cancelled the sword form and returned back to human form.

She looked expressionlessly at Orochi's suffering.

"It seems like you, whose body is close to that of a human being, are having a hard time handling me."

Drawing an arc with his mouth, Orochi stopped breathing and stood up forcefully.

At the same time, there was a sound of something cracking in his leg.

Although Orochi's face distorted with pain only for a moment, Mother didn't miss it.

"You might want to stop moving. The substance of your right leg is nearing the end of its lifespan."

Orochi calmed his breath and erased the pain from his head.

And then, he looked around at the area everything evaporated in.

"Haunted got swallowed up by it."

"Yes. It would be good if he actually died."

"Good grief, I don't think we can count on that."

Although he smiled wryly, there was darkness in his eyes.

"Indeed. To kill him you will have to complete the 《Deification》. And even if you obliterate him with it, you will face the same fate as well."

"I'm aware of that. I have no intention of pulling out at this point."

Orochi answered in an aloof manner and begun to move with a firm gait.

Mother followed after him, two people walked through the devastated land.

Gungnir's deification was different from Mistilteinn's witch hunter form. Even if Gungnir was a Sacred Treasure used by a god, it wasn't a god-slaying Sacred Treasure.

And as the 'deification' name suggests, the person using it becomes an existence equivalent to a god. Of course if it's performed, a human won't be able to withstand it. Rather than requiring the strength of soul, deification needs excessively high physical specs.

Still, Orochi turned into a god without any hesitation to confront Sougetsu this time. Even though he had only few seconds, if it was to kill that man, Orochi didn't hesitate.

"Is what you told him true?"

"...Kusanagi Takeru and Mistilteinn. That you have hopes related to their future. It is true that the assimilation of soul will progress as their bond deepens."

"I know that you despise Twilight Types. You won't fully accept me. But that is why we were able to build up an ideal relationship as a Sacred Treasure and its user."

Mother spoke quietly and stared at Orochi from his side.

"Is there any benefit for you in them becoming a complete god-hunter? It might end as a failure."

In response to Mother's question, he made a meaningful smile.

"Was there a precedent of a person becoming a complete god hunter in the past?"

"No. Mistilteinn who had high potential to succeed has failed in the past, so there's no precedent."

"Then we've no idea what might happen do we. Same for me and you, until the very end we won't know what will happen if we're complete as a deity. Who knows in what form will they end up."

Orochi stared into the distance and continued in a quiet voice.

"...acknowledging each other leads to fusion. That's just wishful thinking without any basis, in the first place, the existence of a god hunter is the biggest obstacle for our objective."

"Perhaps. But see, I want my disciple to choose the path to follow on his own, that's why."

"I cannot comprehend that."

Orochi narrowed his eyes and laughed quietly. The haori draped over his shoulders fluttered like a cloak.

"In any case, it changes nothing when it comes to what I have to do. Just as you wish for, I will have this body and soul undergo deification."

"But after that——make sure that you, who becomes this world's god fulfill your promise."

Mother who was slightly behind him started walking faster and lined up next to him.

"I acknowledge. After I'm reformed in a new shape in this world, I will make it so that your elder sister never died."

The corners of his lips distorted as he heard Mother's reply, Orochi glared towards the front.

"Then, it's war. Not like I wanted it, but since it happened it can't be helped. Let's end this with the minimum amount of sacrifices."

"Acknowledged. We shall destroy those who stand in our way and reach out to those asking for salvation."

And stating their own ambition, they lit the flames starting the second Witch Hunt War.

What Ouka and Mari saw when they rushed to rejoin with their comrades after the battle with Kagerou finished, was a sight beyond all expectations.

In the middle of down-pouring white crystals, there were two different figures.

Unmoving Takeru who fell on top of the snow and the figure of Lapis who embraced him.

Lapis had a painful expression and shook Takeru with tears in her eyes.

Please wake up. I beg you.

Baring her emotions, she kept on speaking those words.

Just like the last moments of her past contractor, Mikoto—— 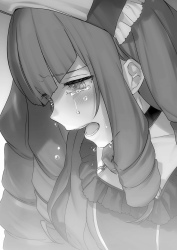 Ouka and Mari could only stare at this scene, astonished.

What they understood, was that some kind of outrageous incident had taken place.

But they didn't know how serious a crisis has come from that event.

Seeing the weeping Lapis, anxiety appeared in the back of their minds.

Her voice that was being drowned out in the falling snow had resounded in Ouka's and Mari's head time after time again.