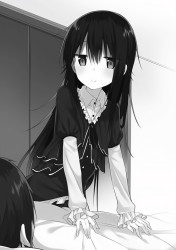 "...chan. Onii-chan. If you don't wake up I'll die. I'll be cornered by despair, die and disappear. Please, don't allow this body to rot away in grief."

I woke up having my body shaken.

In the corner of the comfortable bed that felt like a cloud, I was completely asleep curled up in foetal position.

When I opened my eyes, a black-haired girl was peering into my face.

It was Selene. Even though she was one that had the hardest time waking up early, she was already dressed-up, just like an excited child before a field trip.

"Aren't we quite impatient. Outside is still dark isn't it."

Outside of the window was dark. I recalled the saying that the hour before the dawn is darkest.

Rubbing my eyes sleepily, I have searched my heavy memory.

The heart in my chest was pounding heavily. It's because of the strange dream I saw. Still, I couldn't tell what kind of dream was it.

"I must've teared-up when I yawned."

Selene quietly pointed at my pillow.

There was a stain on it. I couldn't help but see it as something incredibly embarrassing.

Selene tilted her head curiously. I could feel a floral scent drifting from her lustrous hair.

Once again after preparing myself for outing, I have stared at Selene.

Ahh, maybe this is the dream's continuation. There's no way she would wake up before dawn.

My consciousness cleared and I finally began to think about today's schedule. Selene slowly moved away from me and muttered.

"...everyone has already prepared."

Today us siblings and Murasaki-san are going to play in Maumauland... the pretext being looking for who is the best little sister.

I jumped out of the bed, washed my face and brushed my teeth, then changed clothes. I have prepared the luggage the last night.

The little sisters have gathered in the living room.

A number of boxed lunches and side dishes were packed into a pile, Sayuri removed an apron with a smile and putting lids on top of the boxes, she wrapped them around with a purple cloth.

Yuuki laughed with a mug cup in her hand. Today too she was drinking black coffee.

"Nii-chama's such a sleepyhead. Maple couldn't sleep from excitement yesterday. How difficult, I can't sleep at all. He said."

Raising Maple in both hands, Mika danced with joy.

"Morning, everyone. What about Murasaki-san?"

Sayuri held a smartphone in her hand and confirmed it.

"It seems like she's preparing the car on the parking lot."

"Well then, it might be better to wait down there. I'll take the lunch boxes."

"I can't burden Onii-sama with them."

"I've been leaving everything to you, at least let me do the physical work."

The seven lunch boxes that included Murasaki-san's serving as well were quite heavy. Just a moment ago, Sayuri had finished stuffing another, four-tiered lunch box. I lifted that as well.

Really heavy. Tomomi bounced up and stood in front of me.

In response to my words, Tomomi said "I'll let myself be spoiled then".

Having to bear with not being spoiled as the oldest sister has built up and exploded earlier, thanks to that now she had calmed herself completely.

In unexpectedly high spirits, Selene was the first one to walk towards the entrance. I kept up with her. That activeness was unexpected of Selene, who prided herself in being a shut-in.

"Mika-chan. The first experience might be, um, correct thing to say, but spoken by a girl it might lead to a misunderstanding..."

"I-is it Yuuki-neechama's first experience too?"

Seeing the two's exchange, lined up together Tomomi and Sayuri grinned.

"Yuuki-san is an unspoiled character isn't she."

Panicked, Yuuki turned towards the two and spoke.

We got intimate enough to have such a natural exchange with each other.

After going down the elevator we went outside. The eastern sky had begun to brighten, but the outside was still dim. A minivan with lights turned on was waiting for us along the road. Murasaki-san could be seen in the driver's seat.

According to the forecast, today's weather is going to be sunny, a perfect weather for going out.