I was able to release third volume... wait, something came out agaain?!

Yuuki: "Everyone, this way, here! Let's start the fun afterword!"

Tomomi: "Alright! We little sisters corps will occupy the afterword! Hmm... it says there's four pages. That makes me thrilled!"

Sayuri: "I told Tomomi-san it's better to stop. And yet, she forcibly..."

Tomomi: "Pretending to be a good kid all alone. Sayuri's such a schemer."

Sayuri: "I just wanted to say 'earlier, Yuuki-san appeared in the afterword' and that's all... for a while I thought of appearing here..."

Sayuri: "Come true or not, I didn't think we'd suddenly storm into the afterword. Were this to be revealed to Onii-sama afterwards... w-we'll be punished!"

Mika: "Sayuri-neechama, your face is all red and looks somewhat happy. How weird."

Tomomi: "Does Sayuri have a personality that rejoices over punishment?"

Sayuri: "Don't talk about others as if they were perverts! What if Mika-san misunderstands?"

Yuuki: "Well well you two. Let's leave it at that. Also, Mika-chan, pervert is... that's... uh... I'll tell you later. We're at afterword after all! We need to use it more meaningfully or it'll be a waste."

Tomomi: "Selene immediately goes troublesome. This time you're on the cover, appeal better to the readers."

Sayuri: "T-that's right! Being graced with the cover and yet... moreover, h-having a hand in such place, it's hidden but that's..."

Selene: "...I put on the shirt, but changing clothes turned bothersome halfway and stopped."

Mika: "Even when busy, or hurrying, you need to wear panties properly. You'll get cold and catch a cold."

Yuuki: "Don't bring it up again! Let's make that talk fade out! Yup!"

Mika: "Pervert? Is that so Tomomi-neechama? Then, Selene-neechama is a pervert?"

Yuuki: "Stooop! Half of the page was used already, but it's all about perverts!"

Tomomi: "Tchh. I wanted to heat it up. But well, as expected finishing afterword with perverts is no good. Speaking of which, in previous afterword you spoke about us right? In that case, how about every one of us says one good thing about Yuuki?"

Yuuki: "S-stop that Tomomi-chan! It's embarrassing!"

Tomomi: "Don't refrain! Hmm, let's see. Yuuki's good part is... her nice body! I win when it comes to breasts, but your bottom, legs and such.... uhehehehe."

Sayuri: "It's different with me but... how you're happy to be bullied."

Yuuki: "You started by saying you're different but, don't look at me as if I was your comrade!"

Yuuki: "Yup. That's right I guess. I'm happy too to save Mika-chan. But, I did my best for so long to be feminine, so please spare me with calling me a prince!"

Selene: "...kakao-san. Thank you for drawing a cute cover."

Yuuki: "And here goes sudden meta remark?! In that case make it earlier! Eh, uh, the afterword is about to end."

Tomomi: "It went past in a flash."

Sayuri: "Time passes quickly when you have fun."

Yuuki: "Umm, at the end, everyone together."

Thank you for reading! 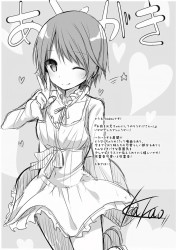 What happened with that suspenseful development?! There are also scenes like that this time, I hope I have managed to relay the little sisters cuteness and disparate atmosphere in the illustrations, if I did then I'm really glad!