Kiseki's body eroded the walls and the ceiling in an instant, approaching Takeru.

Immediately after Hyakki Yakou's meat eroded the wall and the ceiling, the tentacles came flying at him vigorously.

They weren't aiming for Takeru.

Their target was Kyouya and Yoshimizu.

The moment he realized that, Takeru's body moved.

Kyouya who put a hand in the pod with Yoshimizu didn't have a grasp on the situation.

The only one who could move was Takeru. He stood as to protect the two and cut the attacking tentacles not knowing what's happening.

As a countless number of tentacles assaulted him, he couldn't respond to them all.

Then one of the tentacles stretched all at once, hitting Yoshimizu's pod.

There was a sound of glass breaking, equipment being flung. When he looked behind, the pod behind him was destroyed.

Takeru understood that Yoshimizu's life-prolonging treatment stopped completely. Kyouya was dazed for a moment, then he embraced Yoshimizu sleeping in the pod.

At the same time as the pod stopped functioning Yoshimizu began to convulse and spit blood from her mouth.

Losing a meaning in his life momentarily, he could only embrace Yoshimizu.

The surrounding tentacles, wall of meat have stopped moving.

Takeru slowly, fearfully turned around to the front again.

In the center of red hell——smiling, stood Kiseki.

Why did he ask such a question, Takeru didn't understand himself at first.

Hyakki Yakou couldn't be controlled. Going against Kiseki's reason, it would continue to erode things around it, endlessly increasing.

These kinds of words would surely hurt her. As a brother, saying something like that to his beloved little sister disqualified him. It was as if he blamed her for it.

But, Kiseki's expression was too joyful.

It did not seem as if she was unable to control it at all, thus he ended up saying it aloud.

Kiseki curiously tilted her head and put a finger on her lips.

Don't ask so obvious things, Kiseki tilted her head as if to say that.

He doubted for a moment whether she was a fake. However, Takeru knew.

Kiseki in front of him, was perfectly real.

"I woke up from a nightmare, got out of some kind of device and felt Onii-chan's scent in the vicinity. T...that's why... um... I ran over here in a hurry."

Ehehe, she scratched her cheek with a finger, blushing.

It was the usual shy, withdrawn Kiseki.

"Ahh... as I thought, real Onii-chan is so nice. Just being beside makes me warm. It's just as that person said, I totally love the real thing."

Kiseki acting too much like she usually did. Kiseki was too much her true self.

Instead, making Takeru think that she broke.

He clasped the sword's hilt and lowered his waist, strongly gritting his teeth.

She must have been driven mad by Alchemist's experiments... either drugs or torture... that's definitely it!

Pushing down his anger inside, Takeru relaxed and looked in Kiseki's face.

"You don't have to suffer any longer. I found a way to save you. You no longer have to be at mercy of this power and be locked in a cage."

"With this charm and the body inside this container you can live a normal life. You can live like a normal human being!"

Takeru opened the armor on his back, then took out the 《Install》 charm and the homunculi fetus pod from inside.

He spread his arms, calling Kiseki.

He could see her pupils shook faintly.

"And what meaning is there?"

"Wrong. You won't have to suffer because of that body. You've always wishes for that haven't you."

"Kiseki is always honest. I don't get what is Onii-chan saying."

As if really not understanding, Kiseki raised her eyebrows.

With a cramped smile on his face, Takeru froze stiff.

Why does she so happily... so embarrassed, say such a sad thing.

He couldn't even make a forced smile.

Takeru's body trembled. His pale face was devoid of blood. He was unable to cope with the unexpected flow of the events, he clenched his teeth.

Until now, he continued to rush forward for his own goal.

To save Kiseki and fulfill his own wish. That was all.

It wasn't that he didn't think that his salvation might not be salvation for Kiseki. But, somewhere deep in his heart he hoped that Kiseki would want to live with him, there was a part of him that was optimistic.

That she would respond to his request, he though of it... as of natural.

Just like Kiseki's wish that hasn't change from the very beginning.

It was obvious. After all, it was no different from betraying Kiseki. Because he——broke the promise.

Blood flowed from his clenched teeth. Taste of iron, taste of despair.

But giving up here, is something I can't do!

Spreading between him and Kiseki was a mass of Hyakki Yakou's meat.

In this state it was impossible for him to save Kiseki. He had no time to cut them down one by one with his sword.

"I need to save Kiseki here and now... there might be no other chance...!"

He already knew it was suicidal.

But, still, he thought he couldn't withdraw here.

Together with Lapis' reply, a twilight magical circle has appeared.

At the same time Takeru took a step forward. God Hunter form has activated, armour was covering his face. Twilight flames raged from the sword and the Hyakki Yakou by his feet was eradicated in an instant.

Taking firm steps through the flames, Takeru moved right in front of Kiseki. Stretching his hands to her, he said.

And making a troubled smile,

Thinly opening her eyes, with scorn, she rejected Takeru's wish.

The hand attempting to touch her cheek stopped. Instead, Kiseki stretched her hands to touch Takeru's cheeks. The armor on his head broke off and Takeru's real face that received armor's erosion has appeared.

In middle of flames, the two stared in each other's eyes.

"Can you understand Kiseki's feelings a little?"

While saying so, she moved her face closer and kissed Takeru.

One-sidedly, violently, it was a kiss that felt like a lump of ego.

Her tongue was very cold.

Making a watery sound and pulling the thread of saliva back, Kiseki's lips separated from his.

With a flushed face and a freezing cold sigh, she said.

"If you understand... let's continue from back then... okay?" 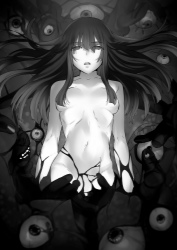 That was when Takeru tried to die together with Kiseki, beginning of everything.

When he decided to save her despite the fact there was no salvation, beginning of everything.

In tears, Takeru was made known how deep his and Kiseki's fate is.

As if pulling him up from the despair, a voice of salvation has sounded.

He shouted, shaking everything off.

Abnormalities appeared immediately. His memory has begun to be disrupted, his consciousness became ambiguous.

The erosion was unstoppable. Neither Lapis nor Takeru could stop it.

——At this rate, he will lose his sense of self.

Right in front of Kiseki he would lose himself.

Kiseki's expression was ecstatic, she stared as Takeru was becoming complete as a God Hunter.

No matter how he wished for it, he couldn't do anything.

At this rate he would kill Kiseki.

He would forget about his comrades.

Piercing through the flames, a red light came flying like a meteor.

It closed directly on Takeru and hit his shoulder.

The flames spreading out were extinguished as if nothing was there right from the start, turning in pure flesh and blood Takeru fell on his knees and supported himself with the sword.

"It seems, like I made it in time. By hair's breadth."

She had a reliable smile on her face.

Hearing these words in his ears, Takeru was genuinely relieved.

If not for Ouka, Takeru definitely wouldn't have come back.

He could only be thankful to her. That he could remain himself was all thanks to Ouka.

"Rather than that... what kind of a situation is this."

Moving her line of sight from Takeru, Ouka looked at Kiseki.

Kiseki was driven by fury. It was the first time they saw her so furious. With tears in her eyes, clenching her teeth she furrowed her eyebrows, looking like a demon itself.

Ouka was surprised just for an instant, then stared directly at Kiseki.

She was calm, as if she knew about it right from the start.

"...why do you refuse Takeru's salvation. Don't you want to be with him?"

"Certainly, I know nothing about you two. However, Takeru decided to save everything and you are included in it, I know that since I was close by. What reason is there to refuse salvation? Why refuse to live together?"

Every word of Ouka's irritated Kiseki.

Hyakki Yakou around her resumed activities and screamed in response to Kiseki's anger.

Mad voice full of resentment. Kiseki's hair stood up and the Hyakki Yakou further wriggled. Numerous eyes have moved on the meat, glaring at Ouka in unison.

In flesh and blood Takeru jumped between Ouka and Kiseki.

With tears in her eyes, Kiseki looked at him.

Takeru sheathed his sword and spread his arms as to protect Ouka.

Kiseki's face distorted in chagrin and she shut her eyes strongly.

She clenched her teeth, holding down her anger.

Hyakki Yakou movement's also immediately stopped its movements, suppressed. As if her attack has subsided, Kiseki looked up at the ceiling and relaxed her shoulders.

Still facing up, she glanced at Ouka and Takeru from behind her bangs.

"I won't kill you and will let you leave today. But, at the very, very end I will surely kill you. That's right... last of last. If I do so, Onii-chan will understand for sure."

When Ouka asked, Kiseki made an exhausted smile and turned to her.

"You see, first, I'll kill all the people in the world. Next, I'll kill Onii-chan's comrades. First, who would be good... maybe Saionji-san. I'll kill her by tearing her limb from limb. Next will be Nikaido-san, I'll skin her alive. For Suginami-san... starting from feet, I'll have my little ones slowly eat her. Then——finally it'll be your turn."

Kiseki pointed her finger at Ouka.

"For you... right in front of Onii-chan, not leaving a cell behind, I'll hurt you, tear you apart, violate you, crush you and give you suffering worse than what Kiseki has tasted."

Kiseki turned with her back to them and clad in Hyakki Yakou, she started to walk towards the darkness.

"Look forward to it. You'll lose everything, every single thing, all of it will fill me."

Dragging the meat with her, Kiseki was leaving.

It was then, that Takeru who was bending over let out a voice.

Just once, Kiseki stopped from a moment.

Takeru stood up, clenching the sword.

"...Kiseki, for your own wish... you're going to sacrifice anything, aren't you."

Just like Kiseki did earlier, Takeru looked up towards the sky.

"It makes our first sibling quarrel, doesn't it."

Takeru slowly pulled out his sword, pointing it at Kiseki's back.

And, with eyes of a demon stained red he glared at her.

I won't listen to what you have to say and————I'll make you happy while alive!"

That oath was firm, full of dread and filled with anger.

Kiseki disappeared in the darkness without saying anything.

Takeru continued to point the sword at her until she was no longer visible.