Spring. After becoming a second year student in AntiMagic Academy, Kusanagi Takeru was freezing on the first day of school.

The students thought they were just going to be lectured in the classrooms, instead, they were given an assault rifle each, heard an announcement, "From today onward, I'd like you all to kill each other for a bit." and have ended up pretending to kill each other with paint bullets.

Their first lesson has turned into a deathmatch between fellow classmates.

It had a twenty versus twenty format. At the beginning there were forty of them.

Although the pretend battle seemed like it would take a while, it ended just 30 minutes later.

Kusanagi fell on his back facing the sky, had a cold muzzle pressed against his forehead and was feeling nothing but consternation.

Immediately after starting, instead of using a rifle Takeru held a plastic bayonet in his hand as he headed into the deathmatch, because of which classmates gave him odd looks.

However, a sword alone was enough for Takeru. His only sword was his only worth.

Unlike other students who weren't familiar with combat, he moved in the darkness to take down his opponents with a sword as he was trained to from an early age, he had confidence in himself.

『"I won't lose, I'll defeat you all and make the world realize swordsmanship is amazin'!"』

In fact, Takeru hadn't lost a single time until now.

『"I won't lose to anyone! Be it guns or magic, I'll cut through all of it!"』

He was confident right from the start

With a bayonet in his hand, he was confident he wouldn't lose to anyone in here.

Looking upwards, he saw something unbelievable.

A scene that made him doubt his sight. Sunset-colored hair shining brightly and cobalt color pupils. Like an embodiment of mythical battle maidens, a beautiful girl looked down on Takeru. 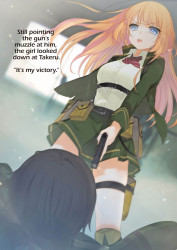 The frustration he felt after losing, motivation he had after enrolling in the school, everything was blown away.

The perfect beauty and strength that can't be described by words was right there.

Still pointing the gun's muzzle at him, the girl looked down at Takeru.

That instant, Takeru's dream and goal, "Becoming the Inquisition head and changing the world." has collapsed.

That was his middle school era.

It happened approximately 2 years ago.

It's been a few hundred years since the witches had been suppressed.

When the "Witch-Hunt War", a conflict between the witches and humanity had ended, the mankind's population went down to one-tenth of its original size.

Humans took 150 years to rebuild society, the world displayed a rapid development of science and technology and begun to show a glimpse of further economic growth due to spread of things like the internet and mobile phones.

The witches were under regulation and the fantastical creatures were nearly extinct. Only a few people were capable of generating magical power in their bodies.

Just like the title of the strongest had once changed from sword to magic, now it had changed from the magic to guns.