I looked at the sinking sun from the back of the Grand Rock and leaned the Black Iron Pickaxe against my shoulder.

After defeating the Cockatrice King boss, all mobs that respawned including the boss have become non-active mobs, but only towards the parties that killed a Cockatrice King.

Once we realized that, Taku and the others have started helping out other parties as much as possible with defeating the emerging Cockatrice Kings.

"Yun-kun, cheers for the good work."

I looked back towards the voice and saw Magi-san and Emily-san who thanks to Taku and others' help defeated a Cockatrice King.

The two were able to safely mine ore in different places thanks to the fact Cockatrices were non-active for them.

"This place is nice. Below there're only fixed types of ore you can get, but here you get various ore types."

"Since conversion rate is high, they're good for covering 【Alchemy】's and 【Synthesis'】 research expanses."

It seemed like Magi-san and Emily-san have acquired plenty of ore.

Speaking with the two, I entered what seemed the Cockatrice King's hay nest to look for useful items.

"But, climbing up this mountain every time to gather would be a real pain."

Agreeing with my words, the two nodded.

『"What's left, is the huge turtle! I'll have you give me all the exp and rare items!"』

The players who have survived have attacked the Grand Rock in unison.

Although there wasn't any real need to defeat it, seeing the players trying to fight with the Grand Rock I was totally appalled. 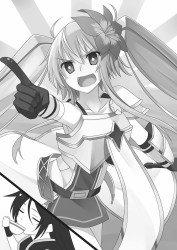 I spread a sheet and put a tea set on top of it, then treated Magi-san and Emily-san to apple tea made with 【Mountain Apple】's skin and black tea as I watched what's happening below.

"If they actually defeated the Grand Rock, it might be easier to get to the upper layer next time but..."

"No matter how you look at it, it's not going down, that thing——"

The players below us continued to change the way they attacked, but no damage at all was dealt to the Grand Rock.

With 【Sky Eyes】 I saw Myu, Sei-nee and others realize normal attacks won't work and move away slightly to plan a new strategy.

"They sure are doing their best. Why not just give up."

"It's because the enemy in front of them isn't fighting back. They can level up their attack-related Senses this way."

While I listened to Magi-san's commentary, a player jumped in the direction the Grand Rock was travelling to and was trampled. Even if the enemy doesn't fight back, it seemed like accidents still happen.

Watching what's happening below us we finished drinking the apple tea and resumed item collection.

"I want to collect as many items as possible. Who knows when will be the next time I come here——whiiihh?!!"

I tried to look through the bottom of Cockatrice King's nest for items, but suddenly fell into it.

Looking up at Magi-san and Emily-san who rushed over in panic, I waved my arms to them to tell them I'm safe.

Under the Cockatrice King's nest spread an empty space inside the rock. Unable to crawl out of the hole I proceeded further and saw a place which looked like a garden.

There was short vegetation growing on the soft ground and a fountain from which a large amount of water flowed towards the back of the cave.

"What's with this place. It's bright."

I looked up towards the ceiling and saw multiple holes big enough for people to pass through, it seemed like they were nests of Cockatrice Kings like the one I fell into.

Light passed through those holes ensuring a sufficient amount of light even in this cave.

"What's this, I wonder. It feels like a broken way of entering. I need to go further to find the exit."

When I checked up the gushing out water, it seemed like it was 【Water of Life】 which was used for crafting and I was also able to confirm there was a portal's transition object. Apparently, this was some kind of a safety area.

I looked around for a little bit and my 【See-Through】 Sense showed a reaction, I swung my pickaxe at its location and was able to get outside.

From what it looked like, the exit was facing the mountain path slightly bellow the summit. Also, there was a Cockatrice King nearby so to enter this area one had to finish at least one battle with the boss.

I thought that I might have to crawl out of that hole if I didn't find a way to escape.

"It extends further into the back. So there's still more to explore!"

As Taku raised his voice with joy, everyone entered the merry mood seeing a short-cut leading to the upper layer of the Grand Rock.

At the same time, the Grand Rock's activities stopped and the gradually increasing intervals between the shaking have changed into a complete stop.

I'll go back to the 【Atelier】 with the portal found here. About the moment I thought that, a friend call has come from Myu.

"Cheers for the good work. We found a portal here, so I'll be using it to go back to town."

"No, there's just a hole that seems to continue further inside the mountain."

『"It can't be, an entrance inside the body?! In other words, Grand Rock was a boss needed to be defeated from inside! I'll be coming right away!"』

Myu one-sidedly ended the friend call. I got worried about her and moved outside the cave and saw Myu advance on the back of the unmoving Grand Rock. Around the middle, when she tried to climb further Cockatrices started jumping out of the nests one after another, there was so many of them it was impossible to distinguish Myu's white equipment and the mobs when they tried to chase her away.

"No way, Cockatrices are springing out endlessly. This sure is fantasy."

There was so many Cockatrices jumping out one after another I started wondering where are they coming from, the mobs have fought off all the players who started a splendid charge upwards together with Myu.

Once again, a friend call came from Myu.

"Well, because Cockatrices are springing out endlessly."

『"To think I'll have to wait for the next chance to climb up! This is frustrating! Then, Yun-oneechan, explore what's there for me!"』

I'm tired and I want to go back already, I muttered in my mind, but it was all too late, I had a bad feeling.

I hurried back inside the cave's resting space and saw Taku and the others already finish their preparations for proceeding further.

"A dungeon full of blood and meat should spread ahead of here."

"There might be some gimmick related to the Grand Rock, or maybe something completely different. That's why, we'll be the first ones entering the unknown area to get information and items!"

When I tried to slip away secretly by approaching the portal for transition, Taku caught me by the shoulders.

My shoulders drooped dejectedly, now let's go, my hand was held and I was taken to where Gantz and the others were.

I thought that women wouldn't like going there after hearing there will be blood and meat, but Minute was unexpectedly enthusiastic and although Mami-san had a slightly poor complexion she didn't complain.

"Well then, Yun-kun. I expect a report of the useful items you find."

"We're scheduled to go back together with Emily-chan so do your best."

Smiling, Emily-san and Magi-san quickly escaped from this place. I wish I could do the same. I thought as I watched the two transition away.

Players have flocked into the cave to register with the portal and have started discussing the dungeon's exploration.

"C'mon, Yun! If we don't hurry we won't get the honours of being the first ones to conquer it!"

"Personally, I don't want to challenge the scary unknown and the grotesque flesh and blood..."

The words I muttered didn't reach Taku, he turned a childish smile my way.

"Geez, just this once. I'll go along with you for conquering this dungeon..."

Taku stood in the front and started walking towards the back of the cave.

In contrast to the dim cave, the party's atmosphere was bright and full of motivation.

It didn't seem like our adventure was over yet.

● Subjugation of the Cockatrice King

● Discovering of a mysterious inside-body dungeon?