"We were able to safely expedition to the Volcanic Area. We used human wave tactics to acquire information on quests, shops, items as well as facilities. This is all thanks to guild members' hard work. ——Cheers!"

Holding a cup with liquor in one hand, Mikadzuchi announced the start of a party ending the guild expedition.

With the people having the 【Cooking】 Sense including me, having preparing food as the centre, the members of 【Eight Million Gods】 were divided in several groups.

A group that boasted of the items they acquired during the expedition, a group that immediately opened auctions for items, and a group that shared stories of their adventures with each other.

Among them, Sei-nee and I stood in a conspicuous place.

"Well then, we will be opening the 【Tsuzura Boxes】!"

We matched our timing as we opened the lids, for just a moment light spilled out from inside and we saw items inside.

"That's great, Sei-nee. It's the material you wanted."

She smiled happily, but a slight shadow appeared on her face.

"To make the staff I only need three, so I'll have two spare ones."

Since it was a rare material in the first place, it had a limited number of uses.

"Inside my tsuzura there are..."

Inside the small box there were earrings, necklace and a hair clip, these three types of accessories.

The effects of the accessories were things like "halves max HP but increases stats", "increases stats when HP falls below a certain percentage", "increases speed, but constantly consumes MP in exchange". Each of them had peaky effect.

"So Yun-chan got unique accessories."

Since they have effects difficult for me to use they'll probably end up as references for crafting, I thought and heaved a sigh.

However, for people who were watching over me and Sei-nee as we broke the seals on the boxes, the items we got were classified as jackpot, which further motivated everyone to challenge the arena.

"Well then, let's go back to Mikadzuchi."

"You're right. And since there's food prepared, let's eat some on the way."

The two of us have headed to the corner of the hall where Mikadzuchi was.

"Oh, looks like you got some amusing items, you two."

Mikadzuchi and Myu's party have gone ahead and started eating, and were chatting with each group.

"I'm sooo envious of you two getting rare items. I'll show you I can get rare equipment in the arena too!"

Seeming like she already had some alcohol in her blood, Mikadzuchi asked us when we sat down and started eating.

"The guild's expedition is over, Missy and Myu-chan, what will you do? Are you going to officially enter the guild? Or will you leave?"

It was the same thing she asked me last night. I already decided on the answer.

"We are going back to our original playstyle as well, is what we decided together. It was a lot of fun this time, so if you're going for another expedition please call us."

Hearing our choice, the guild members who heard it have screamed.

"You guys, shut up! Sure, we failed to recruit pretty girls, but you're being too noisy!"

"But...! It's really motivating to have cute girls with us! Also master, although you have charisma, you have zero charm!"

The guild members disappointed by the fact we didn't join the guild were glared at by Mikadzuchi. This isn't good, let's not break the atmosphere, I thought and came to her rescue.

"Ah, Mikadzuchi. Um... I got some acquaintances in the guild so... can I come to play sometimes?"

I was startled by the energetic reply coming from the entire hall. At the same time, seeing the bad atmosphere change with my words, Mikadzuchi spat out a long sigh.

"Aa-aah, fine, from here on it's adults' time, kids go home. And here we've gone to such lengths to recruit you, guess we gotta drown this in a drink. Also, Sei, see Missy and others off properly."

Mikadzuchi shook her hand saying "go home". Seeing that guild members said "she's being contrarian" or "she's just lonely", it looked like it was lucky guess as Mikadzuchi stood up holding her hexagonal stick.

"Thank you very much. If something interesting happens we'll come running right away!"

What we said in the end was ignored, but seeing as Mikadzuchi's ear were a little red, she must have been embarrassed. As I thought so, I walked together with Sei-nee, Myu and others to the entrance.

While hearing the guild members' voices full of grief behind my back I stopped Myu and Sei-nee for a moment.

"Um... thank you for dragging me out of the workshop."

"Fufufu, so, are we going to get something as thanks? Like, a rare item."

Myu said jokingly, but I immediately responded with "yes" and passed her the bracelet I made for her.

Receiving the white beads bracelet, Myu looked at it happily and also embarrassed hearing a thank you from me.

"I'm happy, but this is kinda sly! I said that as a joke, but you really prepared an item!"

"My, thank you. I'll properly use it as equipment."

"I-I'll use mine preciously too!" 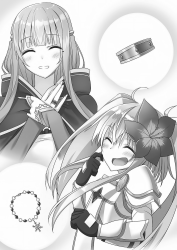 I was glad the two were happy with them.

Sei-nee stopped us as we were about to leave the guild.

"Actually, Mikadzuchi entrusted these to me. So, come to play again."

Before we left, Myu's party and I have received the golden invitation from Sei-nee, it could be said to be the 【Eight Million Guild】's free pass.

I decided to log out after coming back to the 【Atelier】.

Myu and others decided to go off on adventure somewhere after that. Sei-nee had seen us off and returned to 【Eight Million Gods】 guild home.

And, I have returned to the 【Atelier】 for the first time in a while.

Since I haven't been in the 【Atelier】 for a while I was a little anxious about how it's doing, but the counter-type shop was the same as usual. I was also relieved seeing Kyouko-san the NPC managing it.

"Both sales and consignment are as usual. As for things to report, the fruit trees planted in the field have started to bud."

"Understood. I'll check on them later. Also, these are samples of new products and their materials, could you acquire the materials if you see them on the market next time? Also, can 【Karukoko Fruits】 be cultivated in the field?"

I took our the three types of items I created in the 【Eight Million Gods】 guild and started consulting with Kyouko-san to adjust the crafting/sales system.

That's when, the entrance to the 【Atelier】 had suddenly grew noisy, then the next moment the door was opened with impetus and a stream of people have passed through it.

"Hmm, looks like you have new products in stock. Prices are good too. I'll be buying some."

Hearing that I returned to the 【Atelier】, Magi-san and the others have come all at once.

Also the 【Atelier】's regulars who came and had seen me on the counter seat all started saying "it's great that you're back". Confused by the sudden happening I started panicking.

"Everyone is happy to see Yun-kun back!"

"Now, I've got work for you right away!"

Saying so, Taku showed off the 【Yellow Potion】 I previously gave him.

"This 【Yellow Potion】 is highly effective for healing the Grand Rock's heart. Sell them to me, quickly!'

Hearing Taku's words I was surprised that the problem I have been worried about before leaving the 【Atelier】 was so easily resolved and felt like dancing on spot. But that's when Magi-san interrupted us.

"No selling items for which we haven't decided reasonable prices yet! Also, Taku-kun, no monopolizing of Yun-kun, it's not fair!"

"Speaking of which, we have to consult on a fair price. Oh right, this, I brought some souvenirs from the dungeon for everyone."

I passed the items I acquired in the 【Demonfolk Resort】 to Magi-san and others.

Taku looked at those enviously, so I spoke to him.

"There's none for you, Taku. Rather, let's make those 【Yellow Potions】 I gave you, your souvenirs."

"Also on other note, I don't have enough materials for 【Yellow Potions】 so the number I can make now is limited."

Hearing my words Taku drooped down disheartened, but soon enough motivation appeared on his face.

"All right, I'll gather the materials so make them for me with priority!"

Taku jumped outside without even waiting for my answer. Geez, this guy can't be helped, I thought and made a wry smile.

"There's too many things to do. Well, let's do one thing at once."

Charged with motivation after a change of pace in 【Eight Million Gods】 I resumed my interactions with acquaintances and the store's regulars.

For a few days after that, the 【Atelier】 was really busy.

● NEW: 【Dosing】 has reached level 50. A higher sense has been unlocked.

● NEW: 【Crafting Knowledge】 has reached level 50. A higher sense has been unlocked.

● Returned home with a lot of souvenirs for acquainted players.

56 thoughts on “Epilogue - A Party and Accessories”