Elvenblood (Elf of the Fresh Blood (鮮血のエルフ)) written by Fujiwara Yu (藤原 祐) and illustrated by kona.
Published by the Dengeki Bunko, it has currently two volumes.

This series was dropped and will no longer be translated because it's too depressing for me.

Human siblings living in a remote village, elven siblings living deep in the forest. The peace of theirs, who should not have been friends, should have continued forever. However, when the elves suddenly started an invasion on the human world, the feelings of the four were torn apart and they took different paths. Eventually the human boy——Imina, and the elf girl——Ellis, stood on the battlefield. The sword he holds is crimson. The same colour that had flowed on it, and will flow on it from then onwards... 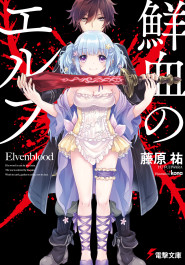 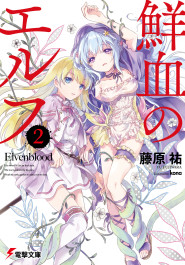