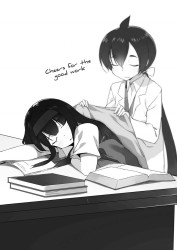 It's been a while (probably) since you read this, this is Kazuma Jouchi.

How did you like the third volume of 'ELYSION virtual region'?

This time it's a story of a gifted and loved by virtual world girl as well as Kiritou Haya who was subtly involved with the main story starting from the first volume.

...ah, as usual from this point onwards it's gonna include spoilers. These are endnotes for the people who read the volume.

The new character this time is Asumi Aoko (although she disappears by the end of the volume) and is the core of the story of this 'ELYSION virtual region'. A girl who has a talent greater than Fuyuki, and yet is used and broken——her revenge that has began starting with the first volume hasn't succeeded because of Taiga and Haya. All the kindness Aoko had in her heart——in the end was all accumulated inside Iora and fuelled her last act.

This time there were major changes in this work's romance relationships.

Fuyuki took a straight approach and relayed her feelings of wanting to be more than 'siblings. Rui is going at a heart-soothing pace. And seeing Rui like that Shio has reaffirmed her feelings.

By the way, in the author's imagination Shio is a perverted girl. She got excited by thinking of seducing her best friend's dear person——a glimpse of that could be seen in the massage scene. In fact it was also a setup for a scent fetish.

Then it's Rui-chan who's overflowing with motherly features + has a huge chest. When I first looked at her in the swimsuit I was like "What's this! It's spilling out isn't it!" and ended up staring at it for five minutes (even now I occasionally look at it). The lap pillow scene is one of my favourite. Rui-chan the true legal wife.

And there's no need to say anything about Fuyuki. The sensual and lovely cute little sister is the best!

The one who draws wonderful illustrations nauribon-sensei, the editor Takeishi-sama, editor-in-chief, people in charge of calibration, and many others. Thanks you all I was able to safely release this book. Thank you very much. And above all, readers who have picked up this book, my appreciations.

Taiga's and the others story has come to a conclusion. From now onwards the girls will accompany him on his full of light road.

Now then, if willed so by fate let's meet again in a different story.

See you next time if there's a chance.