What I want. What I Like. Keep it secret.

The morning on which the second half of the Golden Week begun.

Through STRING, a message from Mariko "Decided on chicken roast" had come.

At first I wondered what's that about, but soon enough realized it was the "deadline for requesting dishes".

Roast, isn't that more like food you'd eat at parties.

And since she's challenging that, it might be cooking practice for someone's celebration.

I responded to message and chatted with Mariko.

Today, Mariko was going out together with Chitose-chan. The chat was rounded up within five minutes by Mariko.

After that, I started to check up on the smartphone.

Since tomorrow I have a date with Tomomi, I was diligently planning for it.

With the notes Sayuri organized as a reference, I confirmed the date course I devised once again.

It was perfect. The weather was supposed to be sunny on the weekend, but I have provided additional pattern in case there was rain.

When I finished preparations for tomorrow, it was still just about ten o'clock. Clothed neatly I left the room. Friday was Mika's day. I went down the elevator to the second floor.

No, I wasn't actually tensed but... what would I do were I to run into Murasaki-san.

As I was distressing about it, the door opened. 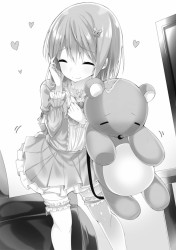 "Welcome back Nii-chama. Want lunch? A bath? Or maybe, you want Mii-chan?"

She held her cheek with one hand and a squirming gesture. It was cute. But, just who on earth did this come from.

"It's still kinda early for lunch, as for bath I can take one in the evening."

Mika pulled my hand and headed to the living room.

She sat down on the stool together with Maple and after having me sit on the sofa she stared at me intently.

"Mii-chan heard a rumour. The origin of this information is a secret."

"Nii-chama, are you going on a second date with Tomomi-neechama?"

"Y-yeah. Who did you hear that from?"

It seems like Tomomi told everyone about tomorrow's date. Just in case, let's explain it to everyone via mail.

"Uhh, I'll admit it. Tomorrow, I'll be going on a date with Tomomi again."

"Is the reason you are going on a second date with Tomomi-neechama, because she's the eldest daughter? Mii-chan the youngest child, gets no date?"

Mika asked with anxiety in her eyes and trembling voice.

"N-no such thing. It happened by chance."

"Yup! It's a promise! Listen okay, let's go on a date with Maple, the three of us. Ah! But Yuuki-neechama and Murasaki-neechama might be good to come too."

I can understand Yuuki, but having Murasaki-san accompany us...

"So Tomomi, Sayuri and Selene can't come with us?"

"You see, Nii-chama. If Selene-neechama is exposed to the sunlight, she'll melt. Because Mii-chan is a good girl she has to come back once the crows start crying out."

Selene starts moving seriously only after the evening comes.

"Since Tomomi-neechama has a boyfriend, if she comes to date with Nii-chama the boyfriend will be pitiful."

There's no apparent reason as compared to the two earlier?!

"You say 'somehow', isn't there some kind of a reason?"

Hmm, she tilted her head troubled and then nodded, when she came up with something.

"I mean, Sayuri-neechama has been trying to stick the boyfriend to Tomomi-neechama all this time..."

It seems like Sayuri's "I hope everyone but me finds a boyfriend plan" was ongoing. Mika pursed her lips and continued.

Speaking of which, little sisters must be having secret meetings. It didn't seem like they gather in someone's room. Well, if I pry it'll trouble Mika so let's stop here.

Mika slowly calmed her breathing, sat down Maple on the stool and stood up, then quietly sat down on top of my lap.

"You know, listen okay? What does Nii-chama like? Maple loves girls, he says! He says not bear girls, but human girls are nice."

"Yup! Food is all right, what you want or what you're gathering, anything."

"Being asked that is kind of troubling."

Being able to live with my little sisters like this makes me happy enough... well, will that do? I guess.

"It's a secret. Mysterious women with many secrets are charming, I heard."

Is that so, o' great little sister. Since Mika's serious, I'll be scolded if I don't answer properly.

Earlier, when answering Mariko it all ended up being strange replies.

"Nono, there's enough as is. Heck, this is more than I deserve."

That way of speaking just now, it was somewhat similar to Murasaki-san's.

Actually, I didn't really have anything I would like. As long as I have everything I need to live, I'm happy. I think the room I'm living in is too luxurious for me.

The reason for this was probably... Jinya-san.

When I was a child, if I asked, Jinya-san bought me anything I'd like.

When Jinya-san stopped coming, I turned into a bad kid who wanted too much from Grandpa and Granny.

Scolded firmly by Grandpa, I was able to reform myself.

And as the backlash... I don't want to put it that way, but even now asking or begging for something felt bad to me.

Speaking of which, when was it that Jinya-san stopped coming any more...

"What is it Nii-chama? Does your stomach hurt?"

"Nii-chama, it's all right to tell Mii-chan in secret what you want, okay?"

"Then, a hugging pillow it is."

"When Nii-chama becomes lonely at night when Mii-chan isn't there, I think it's all right to hug a pillow and think of it as of Mii-chan."

I wonder... what's this mysterious sense of defeat.

Mika got up from my knees, turned on spot with a twirl and looked into my face, her skirt softly fluttered. Yeah, no matter what she does, it's all adorable.

"Also, see, if Nii-chama has something scheduled on Friday, Mii-chan can bear it alone. I'm no longer a child, after all."

That's what Yuuki said... isn't it. I confirmed.

"If I have something planned for Friday, I'm not to worry about you... is that right?"

"I can endure one day. When Nii-chama isn't here, Mii-chan can call Onee-chamas to her room or play with Maple."

It seems like the little sister meetings actually happen. During those they consult each other and cooperate, if they didn't keep it secret from me and told me about it, nothing bad would...

No, possibly, it could be that they were speaking among little sisters about something they should be telling me, their brother.

I-it's not like I'm feeling lonely for being excluded.

"Got it. If I have errands I can't miss, at that time I'll let myself be spoiled by your kindness, Mika."

It was so accurate my ears hurt. In class I still seem out of place and don't have any friends. Yeah, told to go out for some event with two other guys makes me scared now.

When I pat her head with gratitude, Mika smiled happily.