Entire day. Complete. Consultation on the Way Back. 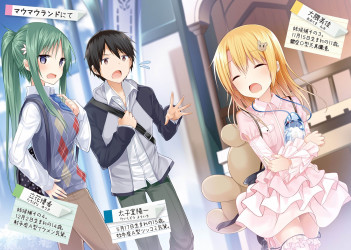 The day in the Maumauland had gone too quickly. It was true that time flows faster when having fun.

Even before the park opened people have lined up in front of the entrance gate and the column had slowly flowed forward as they were admitted.

Since the start, we toured the attractions according to Sayuri's guide.

It was crowded on the holiday, but we were able to ride what we wanted, we enjoyed the parade and the show as well.

For the lunch, we have gone outside of the park and ate what Sayuri had prepared.

When re-entering there was a little incident but... in the end, we have played around until the evening had come.

By the end, everyone watched as fireworks decorated the night sky, bought some souvenirs in the store, I gave sleeping Mika a piggyback ride to the parked car and exhausted, I sat down on the passenger seat in the front.

Not just Mika, Tomomi, Sayuri, Yuuki and Selene have fallen asleep completely by the time we passed by the traffic jam.

"Yoichi-san, won't you rest as well?"

Holding the handle and facing forward, Murasaki-san muttered so absent-mindedly.

"My sight has somewhat dulled."

Since I didn't have a license I couldn't offer to take over, but I was a little worried.

"There is no problem."

Actually, when we got on the biggest and scariest attraction of Maumauland "Big Volcano Mountain", there was a slight accident.

Yuuki went "It's scary. Impossible. Get on without me, I'll wait", completely terrified.

Seeing that, Mika said "It can't be helped. Mii-chan will cheer with Yuuki-neechama from below.", declining to ride on.

Well, until then everything was still all right, but because of something Mika added a new victim had been born.

"Oh right! In exchange for Mii-chan not riding it, Murasaki-neechama please ride on it and tell me your impressions!"

Hearing Mika's request, serious Murasaki-san responded with "Understood"... and as for what happened after that, I want to quickly forget since Murasaki-san's honour is involved in it.

Anyway, it ended up that Murasaki-san, our guardian, was in our generous care.

Mika felt responsible for forcing her, when Murasaki-san somehow survived and come back, Mika pat her head saying "Good girl, good girl. Don't cry. There there".

In a way, recovering Murasaki-san to such an extent was amazing...

At the same time I asked, the minivan shook as Murasaki-san turned the steering wheel to left and right. S-scaryy. Please don't do that when we're travelling at nearly 100kmph.

"Please don't talk about that. Please."

Murasaki-san turned towards me and said that with a straight face. Not good, her eyes aren't laughing. Moreover, she stepped on the accelerator.

Imperceptibly, I have ended up retorting loudly in the car.

For a while after, there was silence. The car smoothly flowed on the road. The traffic jam from when we were leaving the Maumauland's parking lot felt like distant past.

When we entered the metropolitan area, I asked Murasaki-san.

"About what happens from now on..."

Vaguely, about future. About the future life. About the living of me and my little sisters. I wondered, if I who haven't decided on anything should have enjoyed today like this.

Everyone had fun and I too, enjoyed myself.

Even though these might be the last days of it, I didn't regret. Of course, if I could stay with everyone for longer... I thought.

Murasaki-san opened her mouth. I had a hunch she'll respond with her usual "I cannot answer".

I was stunned by the unexpected answer. I wondered if the situation will change in a few days.

"Even if I ask, you won't tell me any more than this, will you."

Strange. Today, I would be more than happy enough to hear her usual "I cannot answer" response.

Were I to ask any more, Murasaki-san would put on the iron mask, so I decided to fall silent.

When I checked the rear-view mirror, little sisters in the back were like sleeping peacefully.

From tomorrow onwards, will I be able to remain everyone's onii-chan?