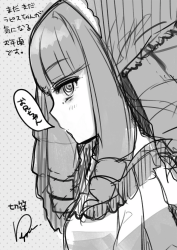 Hello, it's been a while, It's Yanagimi Touki here.

To sum it up easily, a story about overburdened natural lady-killer siscon and a pervert whose sexual preference covers about every fetish, compete for a witch whose tits can't be even called "small", as she's simply flat like a chopping board.

Eh? I'm messing around too much? Isn't it all correct...

...oh well, this time it's centred around Mari whom you've caught a glimpse of in first volume.

Now, this time it's flat chest's turn now. A flat chest phase. No, it's not like I made her like that to balance out the disproportionate amount of big boobs.

It's a super development where a witch enters the Small Fry Platoon, the irregular platoon enters the tournament, Mari and Ouka's become the pair with the worst affinity, and the witch hunter clashes with the sorcerer...

These are the biggest attractions this time.

A choice, the girl who had none, Mari. The girl who did make a choice yet was taken from, Ouka. And the boy who did not make one, Takeru.

In Takeru's case, he just wants to keep living.

Also the villain, Haunted. Even though I've made him, he's a really disgusting guy. He would puff out his chest with pride and yell "We should go down the path of evil!", and do his best.

Now then, the thanks.

The one whom I always inconvenience, S-San who's in charge of me, and Kippu who drew high quality illustrations despite his busy schedule.

Also everyone who picked up and read this book, thank you.

Also for continued support, thanks in advance.

I pray so that I can see you again.