The story about from here on, is what we heard from Murasaki-san.

It was all a secret until I'm sixteen years old.

Speaking of which, when we were returning from Maumauland by car, I recall Murasaki-san saying something like this.

"About what happens from now on..."

Murasaki-san properly waited for this day to come... and told me.

Until certain conditions are fulfilled, the last will and the testament must be kept secret. It was the contract between Jinya-san and Murasaki-san.

The condition was, that I become sixteen years of age. That's all.

Why sixteen years old? Even now, only Jinya-san knows that. But, I think it's because it's the age where I finish compulsory education and start becoming adult... I thought.

For when I'm twenty... thirty... fourty... for each age, a testament was neatly prepared. Only the testament for me as a teenager seemed to be abnormal.

It might have been the last change for me and others to become siblings as children.

If I meet everyone after becoming adults, surely, we wouldn't have become siblings. At most we'd think of each other distant relatives, I think.

To see if I'm suitable to be onii-chan, Jinya-san had prepared a test of "selecting only one sister out of period of two weeks".

As a result, if I chose only one person and shared the heritage with them, it would be acknowledged... that was Jinya-san's thinking.

The problem is, that this teens testament of mine was full of uncertainties.

There was a high chance I wouldn't choose anyone.

In this case, the one troubled wouldn't be us but Murasaki-san.

If I refuse to decide on a single little sister, everything will be entrusted to Murasaki-san.

This was one of the terms in Jinya-san's testament. Thank to that, Murasaki-san shouldered a great responsibility.

The large axe determining the fate of six people was too much for Murasaki-san.

If I chose a single little sister Murasaki-san would be able to live without being troubled.

If she was a more cold and dry person, it would have been easier for her.

But she was distressed.

In the first place, it was a test without the right answer.

No matter who I choose, for Murasaki-san it was an "answer that has to be respected".

But, on the other hand if I choose someone, the family would fall apart. With that said, she couldn't tell me about the testament while I was fifteen. That's why she couldn't say "don't choose, wait".

As not to leak any information to us, Murasaki-san had forced herself to put on a guise of coldness.

She's a good person after all, that Murasaki-san.

And, after she finished telling us about everything, she promised us.

That we'll be able to continue living as we have until now... she said.

The first memorable family event was... my birthday party.

It was late, but everyone had gone to do shopping in the supermarket.

The remaining problem... was about Mariko.

Starting from conclusion, Mariko forgave me.

Although it was through the phone, it was the first time I apologized so much.

In the end Mariko said "for some time lunch box will be omurice then", it seemed like she was running out of patience.

After that, I have honestly confessed what's the situation and meet up with her in neighbourhood supermarket.

I introduced her to little sisters and Murasaki-san.

It might be unbelievable but... during introduction, Mariko understood the situation I was placed in and took it in all at once and, if anything, she said "it's like my little sisters" rejoicing.

Umm... that's... Sayuri's gaze as she stared at Mariko was scary.

Something like that happened, but after my birthday party too, Mariko's relationship with my little sisters had become relatively good.

She spoke excitedly with Selene about clothes, that Selene had made a coming out that she's a celebrity on the net and astounded both Mariko and Yuuki.

Selene said "...you didn't ask", saying she didn't have any intention of hiding it, but the believer of Cicada brand Yuuki for a while after had called Selene "sensei!", getting on her bad side for a while.

Tomomi and Sayuri often tried to compete with Mariko for a while... but before I realized Mariko started cooking with Sayuri and learned FPS games, becoming friends with Tomomi.

It's not like I couldn't understand two people who love cooking getting along... but to think Mariko had a talent for games. Not as much as Tomomi, but Tomomi said she had "outstanding talent". Of course, she was better than I am, in games onii-chan had lost his face.

The sisters' idol, Mika, was in high demand among Murasaki-san and Yuuki. The mysterious, magical triangle relationship was realized.

And, speaking of me, from back then too, I went to everyone's room every day.

The rules from until now haven't changed. From time to time there were days where we didn't meet, and at times like these the turns rotated with little sisters that were free.

Without change in the weekends, we gathered in room 701.

After breakfast with everyone, I approached veranda to open window and exchange air inside. I opened only half of the windows.

Receiving the wind blowing in like a sail, the curtains were swayed to the inside.

Selene, who should have been watching TV with Mika in the living room stood next to me.

"It would be good to after year-end test."

"...rather than being concerned by the others all the time, I'm glad you have become a Nii-chan who also thinks of your own convenienece. I want you to pay attention to me, but if it's too much, it'll be troubling."

"Wanting attention but having too much being troubling, you're like cat aren't you, Selene."

She took a pose of a beckoning cat. Uu... cute. Quite the destructive power.

"I'll keep that in mind. The entire time I forgot the most important part..."

Jinya-san's words that have come to me in my dreams.

At the end of the birthday celebration with Jinya-san, I was told.

"Shall I make you a big brother?"

After saying so, Jinya-san added.

Knowing I have five little sisters, I wasn't confused or distressed, just happy.

Having little sisters, I thought more family members is a good thing.

Once we enter summer vacations, I'll go visit Grandpa and Grandma, then speak with them properly.

It might be early, on August there's Bon holidays. Every year, we're going then to Mother's grave...

As I blankly thought of such things, I confirmed with the little sister-roll in front of me.

Wrapped in the curtains, Selene peeked out with just her face and muttered.

Mika noticed it and ran over. Her sprint was a bit dangerous.

As Mika was about to fall, momentarily Yuuki and Murasaki-san supported her. Yuuki's actions were faster than my raising voice.

Tehehe, Mika laughed. With just a smile Yuuki's expression had melted like cheese. How peaceful... and, when I thought that——.

"Onii-sama! Let's bake a cake together!"

There was a pincer attack from both sides by Tomomi and Sayuri.

"I'd rather challenge school problems though..."

"Then, let's compromise and hit the enemy with baked cake!"

"Cakes are for eating, not for hitting others!"

As the two glared at each other, I spoke to with a smile.

"All right. Let's bake a cake and then go meet Father."

Hearing my sudden proposal, both of them were surprised.

"Can it be, that you want to visit Father's grave?"

She's quite the esper. I nodded surprised.

"I thought it's fine to do it around the Bon Festival. I want to report properly what happened."

"Mii-chan wants to go too! I want to do obon dance! I'll dance waltz with Maple."

"You're right, Nii-san. I'm in favour. Once we decide it, let's consult with Murasaki-san."

Still wrapped up in the curtains, Selene muttered.

"Hey hey, don't wrap yourself up, come out."

I pulled on the curtain and unrolled Selene's bagworm play. She turned round and round on spot.

"Don't make me an evil magistrate!"

Retorting, I finished tidying curtains and opened all the windows.

The wind faintly smelling like summer blew into room 701, it was slightly sultry.

After turning round and round, Selene plopped down on the floor.

Tomomi imitated her and lied down on the floor.

With a smile, Mika added onto it.

Yuuki was lured in by Mika and lied down. 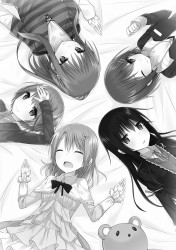 When four people did it, not wanting to be last one standing, Sayuri announced her participation.

Head to head side by side on the floor. I smiled to the little sisters spreading around on the floor like flower petals.

The representative, professional laze-aroundist spoke to me.

Entering between everyone who was lying down, I stared at the sky outside the window.

Without a single cloud, on the spreading blue sky shone the sun.

Today too, was sunny.