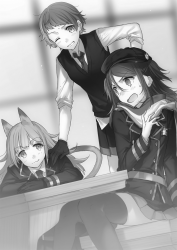 Now first, my apologies but 'date a sword' not gonna appear this time on the title, there's isn't much warranting it in the released chapter. Link here.

Now, there's no news of OSO volume 4 release date, but there are really good news for all the fans, OSO has gotten 58th place on the Kono Light Novel ga Sugoi! which is really good, especially for a new series without anime or manga version whatsoever! That also means it's unlikely... heck, definitely won't be cancelled any time soon, and will be continued for a while.

Also, sometime next week I hope, AntiMagic volume 9's cover should appear. If not, then at the beginning of next month.