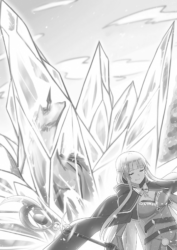 Found some time and translated some stuff. That'd be pretty much it.

Of things that happened lately? Nothing really, I just bought today three first volumes of Ryuuou no Oshigoto novel 'cause they're half off on bookwalker. A great novel, highly recommend it - anime doesn't do it justice.

Right, back to release talk and OSO, here you go with the chapter 3 of volume 11.

I might translate some more soon unless I suddenly turn busy, don't count on it but consider a release could possibly happen within a week.

PS: Illustrations this chapter are amazing.
PS2: Been a while since I said this, but please do purchase the books if you've read the translations. Support the author and the publisher by paying for the entertainment you enjoy. 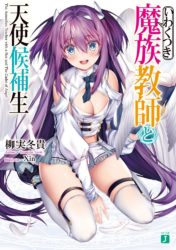 Well, I hope you're not expecting too much because I don't have much, but I have the promised chapter I said I was working on.

Like usual I'm busy and I can't find motivation to push myself to dish out extra hours for translation... but that doesn't mean I'm going to give it up. There've been lots of people asking whether I drop the series or stop translating and such.

Nope. I'm not dropping anything or stopping translations.

I might not release as often as I used to because, well, I'm no longer a student who has too much time on his hands. Still, I have long decided to continue translating until I finish all the series I picked up, which I continue to mention from time to time. Mainly OSO it is, though I want to do Antimagic short stories on the next occasion, at least one for now.

Speaking of Antimagic, like certain no name had posted in comment (thanks for the tip!), there is a new light novel coming from the author of Antimagic, Yanagimi-sensei, called "Iwakutsuki Mazoku Kyoushi to Tenshi Kouhousei" translating into "A Demon Teacher With Circumstances, and an Angel Candidate". I have yet to buy and read it, and probably will do so soon so I might do a review first volume next time. Also, yes, it's the novel that you see the cover of above on the right.

All right, now for the meat: the link to the chapter you were waiting for. Unfortunately no illustration for the chapter :(.

PS: It's a huge shame I'm so behind in translations, because vol15 is going to have Yun in swimsuit (and also other cast in swimsuits), apparently. I might as well drop the illustrations of it disregarding no-spoiler policy that I had, just for people to worship it when it comes.

...Still, we never know when my soul burns on fire for translating again. Let's hope it does and I catch up to my stuff. 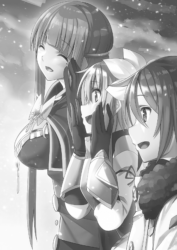 This time a proper chapter equipped with proper illustration.

Also, whenever I appear lately, everyone starts worrying about me or repeating that I should take care of myself and my health. Guys, girls, you're making me feel like I shouldn't be here, instead be lying on hospital bed. Scary.

Link to the chapter.

And now I'm going back to playing the new Giga title which came out the other day (link in the illustration). 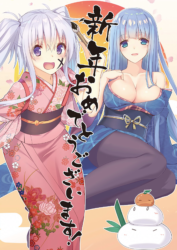 HAPPY NEW YEARS! Is what it says, yes I know I'm late.

Just half dead, or maybe half-life.

As usual, busy with work. But as you can see, still fighting for justice. The translations continue, though at slow pace. Honestly speaking, it's just that I'm tired of staring at the screen straight at screen for many hours when I work, which makes it hard for me to get motivated to stare at the screen more for translation.

Because need to make monies. Though, today I felt in the good mood for translating, so this lengthy prologue didn't take more than a few hours.

A huge shame there's no illustration for the cute Yun this chapter, really. In any case, link here. 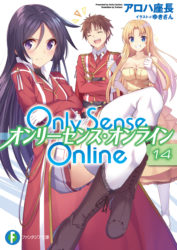 It'll take some time until the next chapter release, though I might find some time to do prologue since it'll probably be short.

Well, that'd be it. And PS: the volume cover for Vol 14 looks wonderful, though I don't have the HQ cover yet (will update the one on the right, when I have it).